The time has come! The hardcore powerhouse Hatebreed have graced us with an album full of 13 heavy in your face, fist in the air, pit worthy, brutally groovy jams. The album also hits the shelves on Friday the 13th which many people find unlucky but after giving the record a spin it seems that luck is on their side. The Concrete Confessional picks up where 2013’s The Divinity of Purpose left off showing the band will never sell out and likes to stick to their guns. That doesn’t mean the band haven’t upped the ante this time around.

Every fan of Hatebreed or frontman Jamey Jasta’s podcast know that Jasta likes speaking his mind and trying to fight for positivity and for the people. They’re the perfect band to throw on during your gym session.
Who needs a personal trainer when you have Hatebreed pushing you? Right from the first track “A.D.” you feel a part of something bigger and that Jasta is fighting right along with you for justice. With lyrics centered on how the American dream has changed drastically and how we need to unite and change this nightmare the American dream become Jasta sets a fire inside of you.

The standout track for me is clearly the single “Looking Down the Barrel of Today” which is definitely going to become a staple in the live set. Starting the record with “A.D.” and following it up with this track is the one-two punch that will lay you out in the pit for good because Hatebreed is not messing around and there’s no room for ballads for miles. The intro builds up warning about the decimation that Jasta and his crew are about to unleash on those in their path and they end the song the exact same way showing all that they came, they saw, they conquered. A very groovy track that is Hatebreed at their finest.

“Walking the Knife” is another track that sticks out for a few reasons. The intro reminds me of Hatebreed’s classic song “Perseverance” before alternating between two-step beats, a heavy bouncy groove, and even
short blast beat sections. Gang vocals fit perfectly in this track and will
definitely work well in a live setting and are pretty catchy.

These are just the tip of the iceberg for the motivational mosh jams that fill The Concrete Confessional. Almost every song feature the fast hardcore/punk circle pit starting beat and the heavy stomping breakdown metal grooves that makes Hatebreed the perfect blender of the genres. “Seven Enemies” features probably the best stomping groove on the album with “Us Against Us” coming in as a close second. Instrumentation gets its moments to shine like the guitar solo on “Slaughtered in Their Dreams” and the cool little bass guitar licks in “Something’s Off.” This then launches into one of their mellower songs on the album, if that’s even possible to say. The Misfits are a huge influence on Hatebreed and that is evident by the gang vocal “OH’s” featured on “The Apex Within.”

They keep it short and sweet, tearing through the record in a little over a half hour with only one song over three minutes. I would not be opposed to hearing the record in full live to start the set followed by plenty of time for classics. Hatebreed is firing on all cylinders and definitely do not disappoint with The Concrete Confessional. 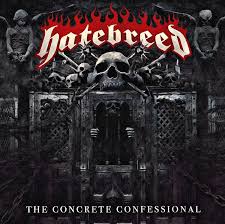