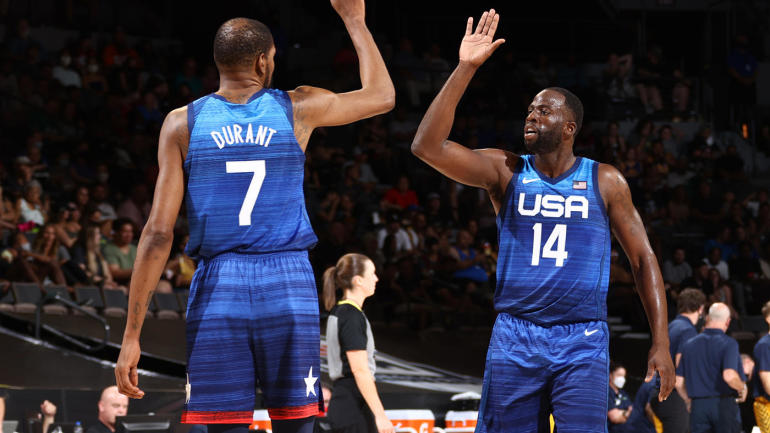 Team USA men’s basketball squad is set to travel to Tokyo to compete in the upcoming Olympics. In one of the craziest times in American history, the roster is experiencing their own set of difficulties at home due to the ongoing pandemic.

Washington Wizards shooting guard Bradley Beal pulled out of the Games due to being placed in health and safety protocols. As a result, Detroit Pistons forward and fellow Team USA member Jerami Grant was also placed into these same protocols. Cleveland Cavaliers power forward Kevin Love also withdrew his roster spot with Team USA because of continuous issues with a right calf injury.

Because of these problems with COVID-19, the team canceled their Friday night contest against Australia. It is unclear at the moment if more members of Team USA will have to miss the Olympics, but Team USA elevated San Antonio Spurs small forward Keldon Johnson and Denver Nuggets center JaVale McGee as replacements for Beal and Love. As it appears, there may be a chance that Team USA will have to find a replacement for Grant, if he is unable to clear health and safety protocols before the team departs for Japan.

Statement from @usabasketball on canceling Friday's game with Australia because of health and safety protocols.

Bradley Beal has been ruled out for Tokyo and Jerami Grant has been placed in the protocol pic.twitter.com/1q3tiEScbr

Critics questioned the team’s decision to choose Johnson and McGee over other NBA stars like Trae Young, Zion Williamson, and Ja Morant. The COVID-19 restrictions could have been a factor in picking Johnson and McGee in favor of other NBA players. Johnson is also coached by Gregg Popovich in the NBA, who is the current head coach of Team USA.

The team’s health issues are coupled with their on-court struggles against Nigeria and Australia. Team USA had only lost two exhibitions matches prior to 2021 and the team fell in their first two games in Las Vegas. Luckily for the USA men’s basketball team, they bounced back on Tuesday with a 108-80 win over Argentina in their third exhibition match.

Talent is not an issue with this team at all, as they boast several All-NBA selections on the roster. The issue seemingly is chemistry and lack of time play with one another. Team USA also has to make adjustments with the FIBA officiating that differs from the style of officiating the players are accustomed to in the NBA.

USA men’s basketball will be led by Kevin Durant and Damian Lillard. Durant was an Olympian in the 2012 and 2016 Games, now making his third appearance with Team USA in the Olympics. The team will also welcome Devin Booker, Khris Middleton, and Jrue Holiday to the squad after they wrap up the NBA Finals in just a few days from now.

#USABMNT jumped out to a big lead & never looked back in the 108-80 win over Argentina@KDTrey5 & @RealDealBeal23 both tallied 17 PTS & 6 REB in the W pic.twitter.com/VJIX6MA9xy