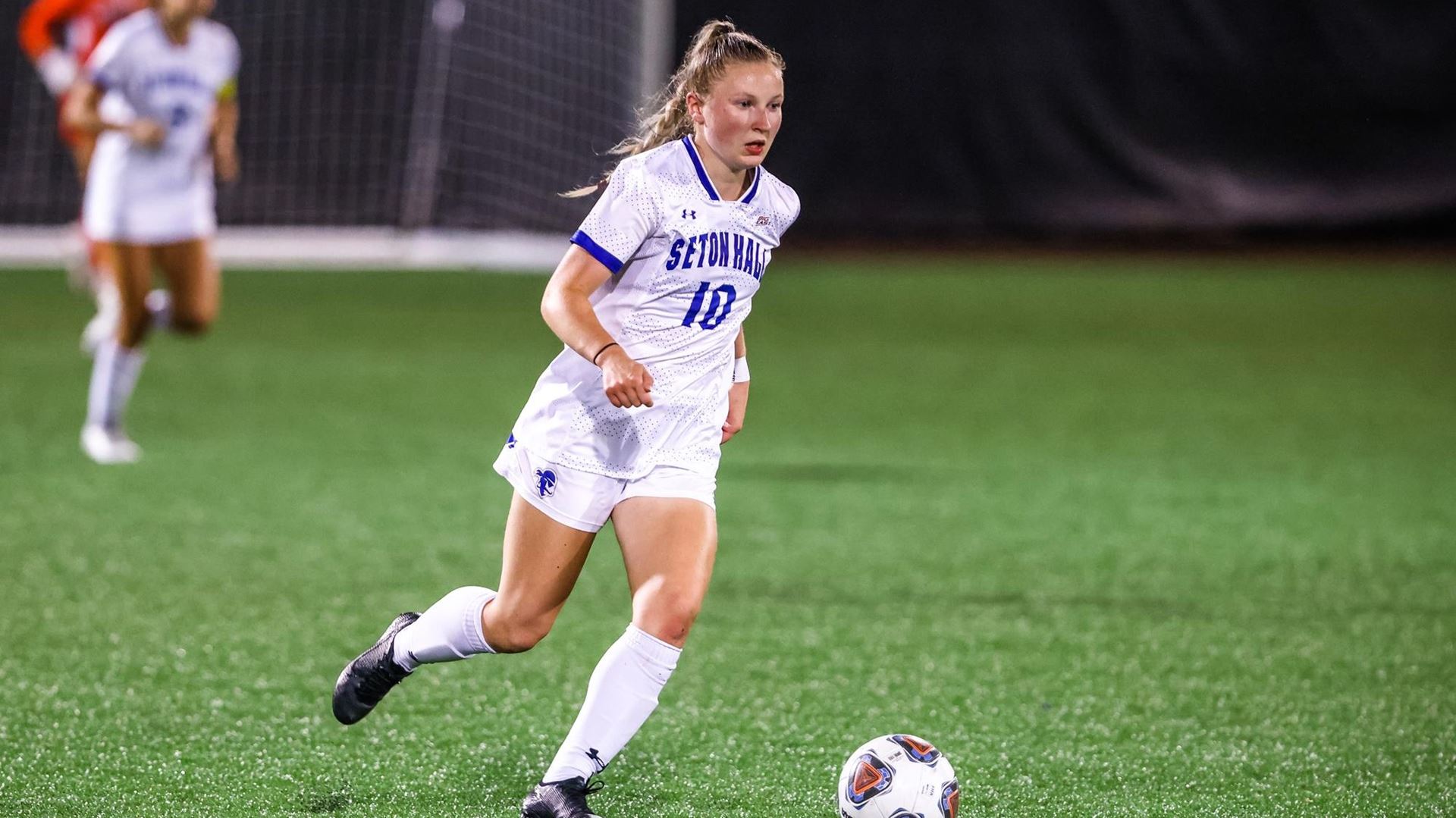 SOUTH ORANGE, N.J. – The Seton Hall Pirates (6-7) suffered a one-sided defeat against the DePaul Blue Demons (5-7) Wednesday night by a score of 3-0.

Seton Hall, who came into the match hoping to stop a three-game skid, had their sense of urgency on display out of the gate. The Pirates controlled the tempo early and put pressure on the Blue Demons’ defense which fended off eight first half shots.

Despite failing to be the aggressors early, the Blue Demons were able to strike first. Graduate student Morgan Turner recorded her first of two goals on the night and broke the game’s deadlock in the ninth minute by capitalizing on a one-on-one opportunity in the open field.

Stopping Turner, DePaul’s leading offensive threat who recorded a hat trick in their previous victory, would be a point of emphasis for the Seton Hall defense throughout the game.

The Blue Demons gained the advantage in less than 10 minutes, and their offense would not remain dormant for long. After Turner’s initial score, Junior Ebba Costow send a ball across the top of the box to junior Kristin Boos. Boos strike hit the back of the net in the 13th minute, putting the Pirates in a 2-0 hole.

This time via forward Kristin Boos.

After an early offensive flurry, both teams settled in for the remainder of the first half. Although trailing, Seton Hall more than doubled DePaul’s shot total to begin the game. A strong outing from Blue Demon goalie senior Mollie Erikkson anchored DePaul’s stout defense. At the break, the Blue Demons maintained a shutout and led 2-0.

28' | Cara nearly finds Naomi in the box as the Pirates try to draw closer.#HALLin pic.twitter.com/w5Wz8Ehkp8

The second half opened with DePaul controlling the pace. It happened in less than a minute, but the Blue Demons were able to draw a foul within the box resulting in a penalty kick.

It was Turner who capitalized on the opportunity, sending the kick through for her second goal of the night. With over 40 minutes left to play, the Blue Demons held a 3-0 advantage.

Turner made her presence known early and often in both periods. The Blue Demons are a perfect 5-0 this season when she finds the back of the net, and over her entire career, DePaul has lost just once in 19 games when she scores in any capacity.

Seton Hall has now dropped four straight contests and have yet to record a home victory against a Big East opponent. For DePaul, their win streak over the Pirates extends to nine straight.

Not our night tonight against DePaul. We'll be back on Sunday at Owen T. Carroll Field against Xavier at 1 PM #HALLin ⚪

Up next, the Pirates will face the Big East leading 11-1-1 Xavier Musketeers. Joe Matthews and Chris Kiely will have the call from Owen T. Carroll Field on Sunday, Oct. 10 at 1 p.m. on 89.5 FM WSOU.