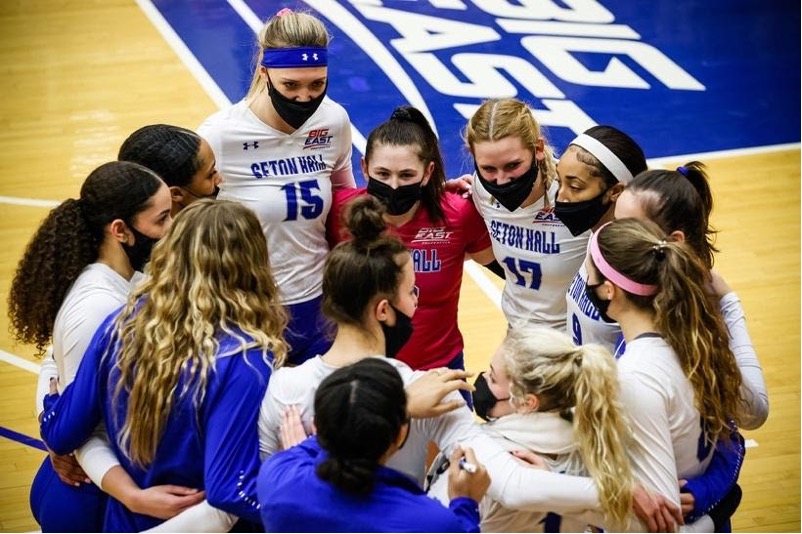 Seton Hall Volleyball continued their conference play this past weekend with a set of matches against the St. John’s Red Storm. Heading into the weekend series, the Pirates had a record of 3-2 on the season and were coming off of a 1-1 split series against the Providence Friars last weekend. St. John’s had a 5-3 record and lost to Villanova this past Wednesday, 3-1.

Seton Hall has a slim 17-16 lead in the all-time series against the Red Storm, but St. John’s has won the last four matches, all sweeps. The Pirates’ last win came in four sets at Carnesecca Arena in 2017. Although, the Red Storm are coming off a banner year, which included a 22-12 final record and a surprise 2019 Big East Tournament Championship. St. John’s earned the No. 4 seed in the 2019 Big East Tournament, and that was their first Big East title in 12 years.

On Friday night, in the first set, St. John’s assumed control after a late 11-3 run where the Pirates then trailed 20-15. St. John’s took the first set, 25-16. Seton Hall once again trailed in the second set and fell 25-19. The third set was very close but St. John’s prevailed, 25-21. This left the Pirates 3-3 on the season. Emilee Turner led The Hall with 11 kills, freshman Perri Lucas had nine kills and 10 digs, and Taylor Jakubowski had 23 assists and nine digs.

The Hall is battling back here in set two. The Pirates trail, 16-13. Timeout Red Storm.#HALLin pic.twitter.com/4V3s8emovs

After a quick turnaround, the Pirates and Red Storm met again on Saturday night. Seton Hall started off strong with a 7-2 burst and later, a lead of 21-15. The Hall downed St. John’s in the opening set, 25-23. This snapped a 15-set losing streak for the Pirates against the defending champ, the Red Storm.

In the second set, the Pirates came out just as strong with a 17-13 lead but lost some stamina and fell 25-23. The third set was brutal to say the least, St. John’s dominated and won it quick, 25-9. The fourth set followed suit and the Pirates fell 25-12. Turner led The Hall with 10 kills and Jakubowski finished with a double-double of 31 assists and 11 digs.

The Pirates are FIRED UP!! Seton Hall starts the match with a 7-2 burst prompting an early Red Storm timeout.#HALLin pic.twitter.com/kpZuajlfoG

While this weekend series could have ended much better, Seton Hall did earn some recognition with back-to-back Big East Freshman of the Week honors for Tsvetelina Ilieva this week and Lucas last week. The Pirates will end the weekend with an overall 3-4 record. Seton Hall will look to improve upon this when they head to Philadelphia next weekend to take on the Villanova Wildcats for two straight on Friday and Saturday evening at 7:00 p.m.

Haley Zemek can be reached at haley.zemek@student.shu.edu