Recap: Seton Hall's Season Ends with a 4-2 Loss to Xavier 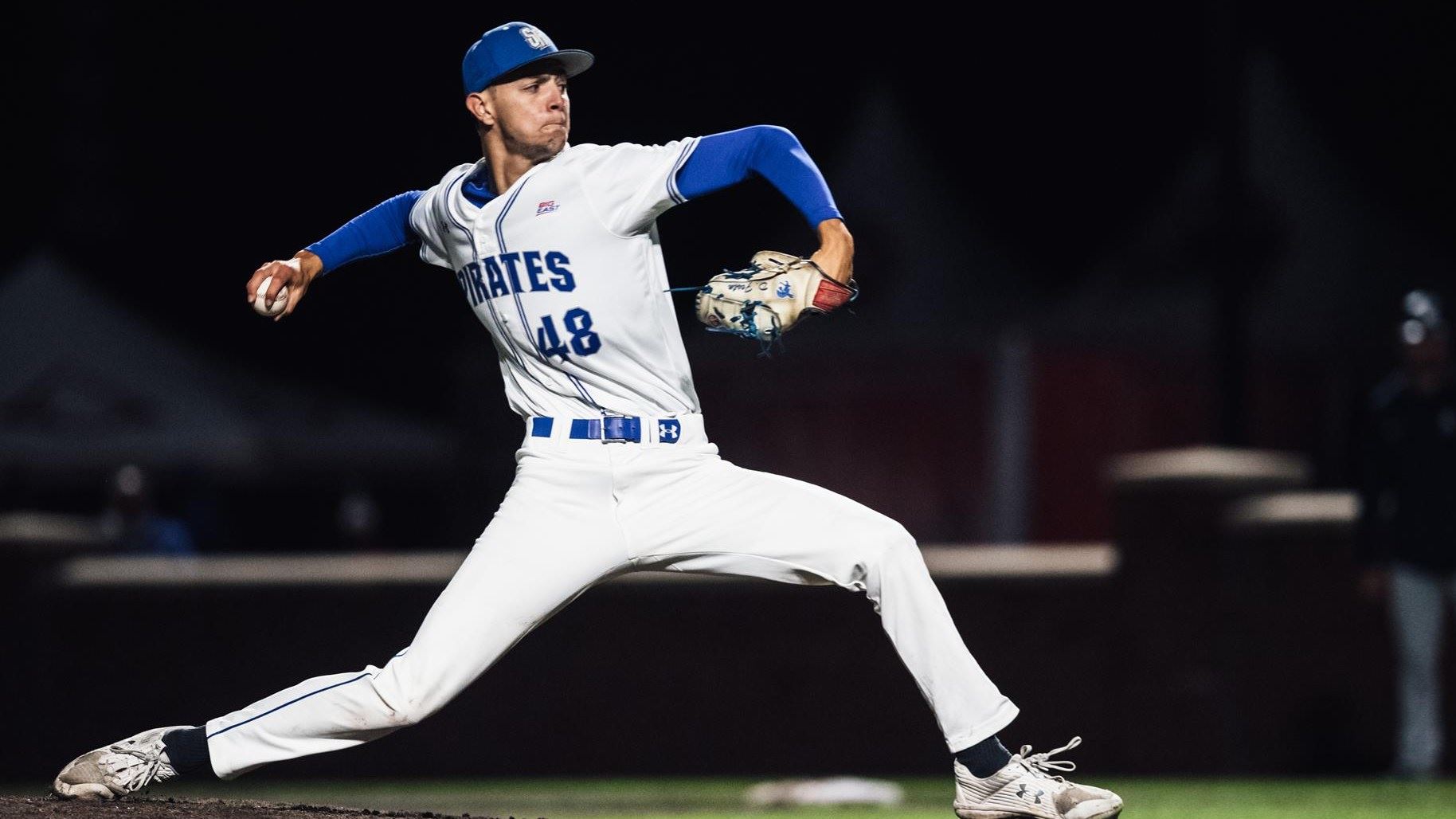 The Seton Hall Pirates Baseball season came to an unfortunate end early Saturday morning, as they were defeated in the Big East Tournament by Xavier in a 4-2 affair. Weather played a major factor in this one, and right from the start.

The game, originally slated to start at 2:30 p.m., was put into a series of delays thanks to rainy, windy weather. It was pushed back to 5:00 p.m., then 8:00 p.m., and then finally got started at 10:00 p.m., while raining sideways for a good chunk of the game. The Hall jumped out to a hot start in the first, plating a run on a 2-out RBI single off the bat of Connor Hood.

On the other side of the ball, Pirates ace David Festa got off to a blistering start, who, despite walking two, did not allow a single Musketeer hit through the first 4.1 innings. However, in the fifth, the Xavier bats woke up. After Festa allowed a walk and a single, junior Luke Franzoni roped a two-out triple off the wall in right, scoring two, and putting the Musketeers up 2-1.

Luke Franzoni hits a two-run triple and Xavier takes the lead in the top of the fifth!

That score would hold until the bottom of the seventh inning, when Seton Hall began to piece together a rally. Alex Clyde led off the inning by poking an opposite field single to the right side. Will Gale then moved Clyde over to second on a sacrifice bunt. Xavier pitcher Lane Flamm then began to lose his control, walking Jerry Huntzinger and then hitting Jonathan Luders with a pitch to load up the bases with only one out.

With the bases juiced, Casey Dana came to the plate, and showed the importance of just putting a ball in play. Dana hit a dribbler to the right of the mound, which was fielded by Flamm. Flamm tried to flip the ball with his glove to get Clyde trying to score at home, but his flip was off-line, and Clyde crossed the dish to knot the game up at 2. The momentum was building big-time for the Pirates, as the bases remained loaded with one out as First Team All-Big East first baseman Matt Toke entered the batter’s box.

Toke hit a grounder to short, a tailor-made double play ball. However, Xavier was unable to double off Toke. Huntzinger came home to score and give the Pirates a 3-2 lead. Or so it seemed. It was at this point that the balloon of momentum growing for Seton Hall was deflated. The umpires gathered and went to video review and determined that Dana had committed runner’s interference while sliding into second on the play, resulting in Toke being called out, and negating the go-ahead run. A controversial call, but one that made a world’s difference in this matchup.

Nevertheless, the Pirates went into the top of the eighth having evened the score and kept rolling with Festa on the mound. Festa got the first batter of the inning in Franzoni to fly out, but immediately gave up a double to shortstop Jack Housinger. With the potential go-ahead run in scoring position, left fielder Andrew Walker stepped to the plate and roped a ball into left field. It was at this point that the weather that pushed the game back eight hours came back to rear its ugly head. As Pirates’ left fielder Justin Scotto ran up to make a play on the ball, he hit a patch of wet grass and slipped and fell, allowing Housinger to score the go-ahead run without a play at the plate.

Andrew Walker drives in Jack Housinger to put the Musketeers in front in the top eighth!

Festa was pulled from the game, but he still wound up with a great looking line on the night. 7.1 IP, with just three runs allowed and seven punchouts. The ball was handed to sophomore Chris Shine to try and get the Pirates out of the inning. Xavier’s hitters made it a hard-fought task for Shine. Shine’s first batter, Natale Monastra, worked a full count walk.

With two men on, the next batter, Jared Cushing, popped a ball up to the pitcher’s mound, which was promptly dropped by Shine. Luckily for the Pirates, thanks to the runners on, Cushing was called out on the infield fly rule. With two outs, designated hitter Tyler DeMartino stepped to the plate and worked a five pitch walk to load the bases. However, Shine buckled down, and immediately struck out the next batter in Alex Helmin to send the Pirates into the bottom half of the inning.

To start off the eighth, Xavier handed the ball to Sophomore Michael Dillon to relieve Flamm. Dillon got off to a bit of a rocky start, and Seton Hall looked on the verge of another rally. Despite a strike-out from Tyler Shedler-McAvoy, the Pirates put two men on base thanks to a Hood single and a Scotto walk. However, the runners wound up being stranded, after a Clyde groundout and a Gale strikeout.

END 8 | Michael Dillon gets the K, his second of the inning, to get out of the inning with the Musketeers in front!

Moving on to the ninth, the Pirates gave the ball to senior Hunter Waldis to try and keep the deficit to just one run. Waldis got off to a hot start, striking out the leadoff batter and getting ahead in the count against Xavier’s Sam Olson. Waldis almost got a second straight punchout on a low and outside fastball, but it was called a ball to the Pirates’ dismay. Waldis then began to lose the zone, walking Olson. Waldis wasn’t the only one to struggle with command on the night, as his walk of Olson was the seventh of the night for the Pirates’ pitching staff.

With Olson on first, Franzoni stepped to the plate, and sent a 1-0 pitch into left field, setting the scene of runners on first and second with only one out, and Housinger stepping to the plate. The man who scored the go-ahead run earlier worked a full count against Waldis, and then lofted a pop fly into left field. Then, in a deja-vu-like moment for the Pirates, Scotto slipped and fell on the wet grass again, unable to get to the ball which dunked in for a go-ahead RBI double.

Jack Housinger drives in a run in the ninth and the Xavier lead is two!

Two runners on with just one out in the inning.

With an insurance run now on the board, the Musketeers were looking at a 4-2 lead with two men in scoring position, and only one man out. It was the perfect situation to blow the game open. However, Waldis was able to bear down, and struck out the next two batters he faced, allowing the Pirates to escape the top frame of the ninth with no further damage.

M8 | Xavier takes the lead but Shine comes in and gets the final out!

Hood, Shed and Scotto are due up for The Hall. #HALLin pic.twitter.com/Rt9QjvZ2hh

With the season on the line, the Pirates’ top of the order was coming to the plate in the bottom of the ninth. Xavier sent out Trey Schramm to try and close out the game. With Schramm entering, it marked his 100th career appearance as a Musketeer, setting a school record.

Trey Schramm enters for the bottom of the ninth, setting the new program record for appearances at !#LetsGoX pic.twitter.com/2PiiJ0vkiw

And Schramm made sure his record-setting appearance was one to remember, as he sent down the Pirates 1-2-3 on just seven pitches and moved the Musketeers on in the Big East Tournament. The Musketeers will face the loser of the matchup between UConn and Creighton on Saturday for a chance to move on and play for the Big East title. As for the Pirates, they head home.

Despite the disappointing ending, it was still a great season for the Pirates. They made their 10th straight Big East Tournament and had three First Team All-Big East players in Festa, Huntzinger and Toke. It was a great run by the Pirates this year, and great things remain on the horizon for the program.