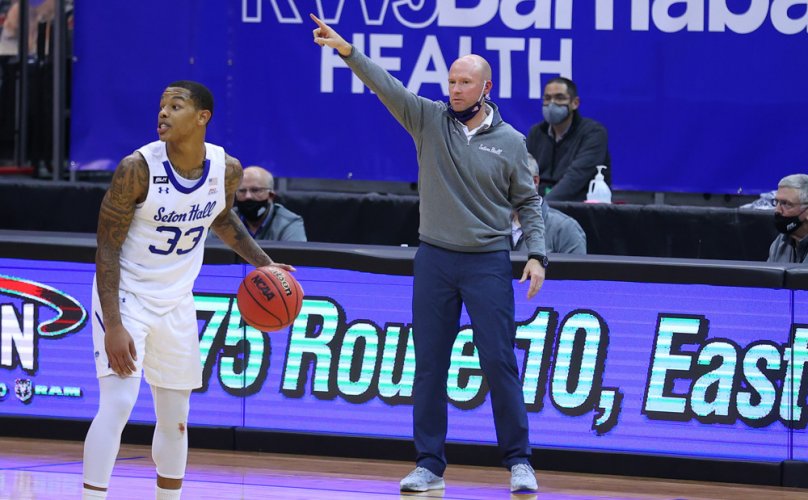 Although the Pirates walked away with a 57-51 win on Valentine’s Day, the chemistry on the court was indeed questionable. A slow start for both the Pirates and the Golden Eagles picked up throughout the second half, with Marquette slowly closing in on Seton Hall’s lead. However, Marquette’s lackluster offense and the Hall’s lockdown defense proved successful for the Pirates to end up on top.

Two teams averaging point totals in the upper seventies found themselves scoring less than 30 points each just in the first half. Though the Pirates found themselves up by six points at the end of the half, both teams were in the same boat when it came to their offensive performance. Marquette shot a shaky 26.7% from the field alongside Seton Hall’s 40%, and both teams shot less than 16% from behind the arch. This first half was characterized by general sloppiness by both teams and the inability to capitalize off of those resulting turnovers.

Things turned around nicely for the Pirates through the start of the second half with players like Jared Rhoden dominating the Golden Eagles offensively. Rhoden shot 41% from the field and contributed 20 points to the Pirates’ late game win along with seven rebounds and four assists.

During this half, Pirates like Sandro Mamukelashvili and Shavar Reynolds found their footing and played much more efficiently compared to some of the mistakes made in the first half, those two combining for 21 points. Though Reynolds ran into foul trouble late in the second half which handed Theo John multiple opportunities to build the Golden Eagles’ lead, Coach Willard’s confidence in sending him back into the game paid off.

Willard said, “I love being aggressive…but I knew I had to stay solid for the last 7 minutes.”

Reynolds remained in the game and converted fouls into much needed points. Thanks to the Pirates’ 76% free throw shooting, they were able to walk away with their third straight win. While it may not have been the prettiest victory, there were many key aspects that contributed to their effort. Lockdown defense on Marquette’s star shooters were effective in keeping their offensive efforts to a minimum.

Specifically, Dawson Garcia who was dangerous in his last game was left scoreless thanks to the Pirates’ defense. One of the biggest downfalls the Pirates experienced this season was their inability to hold their opponents at a steady distance. Although their lead was cut short in the final minutes of the half, it is easy to see that more consistent playing throughout the game ends up faring much better for the Pirates than playing catch-up in the last couple minutes.

While the hard part of the season is over after, especially after that unfortunate string of losses against two top 25 teams, this is the time where the Pirates cannot let their guard down.

As we have seen, leads change in an instant and wins become losses, especially when it comes down to the wire. As long as the Pirates keep their opponents at an arm’s length away throughout their upcoming games, there is no doubt that they can make a deep run in the Big East tournament.