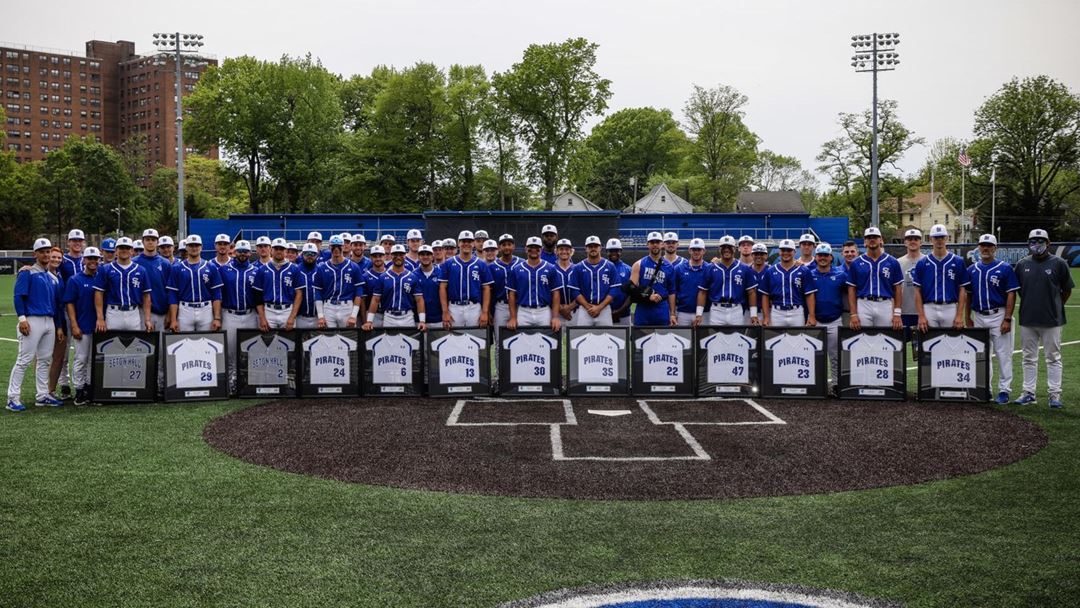 It’s tournament time once again in South Orange! In their last home series of the season, the Seton Hall Pirates welcomed in the Creighton Bluejays in a clash of the Big East’s top two teams. The titans traded blows during the four-game set taking two apiece. But as the Pirates eclipsed their 23rd win Saturday evening, they secured their spot in the Big East tournament for the 10th consecutive season.

A slow start for the Pirates offensively saw them drop game one Friday afternoon by a score of 6-1. Senior Ryan McLinskey took the mound for Seton Hall as per Friday-usual. McLinskey dazzled in his last start against Georgetown delivering a ten-strikeout performance. However, he was unable to build upon his best outing of the season surrendering four runs in just three and two-thirds innings to Creighton.

A four-run fourth inning powered the Bluejays' offense. After forcing the first two outs of the inning McLinskey delivered three straight walks to load the bases for Bluejays' Senior Parker Upton. Upton beat out a slow chopper down the first-base line, and as the Pirates protested the call at first base, the Bluejays utilized smart base running to score all three runs.

M1 | McLinskey ends the first with a K 🔥#HALLin pic.twitter.com/rs5HB7ULte

The one bright spot for the Pirates was Senior Matt Toke who went 2-4 on the afternoon. Toke had registered a hit in eight of his last 10 games and was the only Pirate to reach base twice in game one.

Saturday’s doubleheader revitalized the Pirates’ offense. The first game of days mini set was the shortest of the weekend at just seven innings but produced far and away the most offense. A 15-0 shutout allowed Seton Hall to flex their muscles on both offense and defense - emphatically responding after dropping the series opener.

Junior David Festa took the mound and confidently produced a complete game shutout for his sixth win of the season. Striking out eight, Festa has strung together three straight starts of at least seven innings pitched and at least seven strikeouts. Much like Creighton the day before, the Pirates’ offense came alive in the fourth inning. Senior Tyler Shedler-McAvoy knocked in Senior Casey Dana allowing the Pirates to take their first lead. The Pirates would go on to produce seven additional runs in the inning with 15 total on the afternoon: their highest-scoring performance of the season.

B4 | Grober drops one down the left field line!!!

Game two’s traditional nine-inning format was the closest of the series thus far, but the Pirates were able to come away victorious defeating the Jays 5-3. After the seven innings of dominance Creighton had just endured, they were able to strike first, this time off the bat of Junior David Vilches. After falling behind 1-0, an error by the Bluejays’ third basemen allowed Graduate Student Connor Hood to score.

In the third inning, Creighton seized the lead again going up 3-1, but the Pirates were able to respond a second time. A productive at-bat by Hood moved Dana and Toke into scoring position which laid the groundwork for Shedler-McAvoy who’s single tied the game at three apiece. The go-ahead run was scored by sophomore Devin Hack who was knocked in off a single from Senior Jerry Huntzinger. In the ninth, the Pirates turned to senior closer Sean Miller who had posted a 2.08 ERA on the season. Miller made quick work of the Bluejays’ to record his fourth save of the season. At the end of Saturday, the Pirates had jumped out to a 2-1 series lead.

Well THAT escalated quickly@SHUBaseball sends 13 batters to the plate and scores 8 runs on 7 hits and a couple Creighton miscues to go up 8-0 thru 4 innings. pic.twitter.com/YWtrf1akXh

The final game of the weekend’s series concluded Sunday on the Pirate’s Senior Day. Creighton, determined not to drop three out of four to a team trailing them in the standings, spoiled the afternoon’s festivities taking the game 3-1. Sunday’s matchup was much less offensively driven in comparison to the high-octane doubleheader from the day before.

For Seton Hall, Tyler Burnham took the mound for his second start since etching his name into the history books two weeks ago. Burnham had tossed the fifth no hitter in Pirate’s history against Georgetown but followed it up with just a two-inning performance surrendering six runs to Xavier. For Creighton, Freshman Hudson Leach made his first start of his collegiate career after appearing in relief throughout the season.

Neither starter surrendered any runs keeping the scores at zero until the sixth. The Pirates took the lead first off the bat of Casey Dana. However, Dana was only a temporary hero. Eighth inning trouble saw the Pirate’s lead disappear. First, the game was tied off a wild pitch. Then, with multiple runners still on the base paths, David Vilches came up to deliver the final blow.

Despite the results of the afternoon’s game, the Pirates were still able to celebrate as nine of their players were given their senior day celebration. Notable veterans like Dana, Burnham, Shedler-McAvoy, and Huntzinger have delivered unforgettable moments throughout this season and their Seton Hall careers.

However, their work as Pirates is not yet finished. They along with the rest of their teammates will be one of four teams competing in the Big East tournament for the 10th consecutive season. Seton Hall has one final series left. They will travel to Storrs, Conn. to take on the 25-16 UConn Huskies – the current third-place team in the Big East.