Recap: Pirates end the season getting swept by UConn 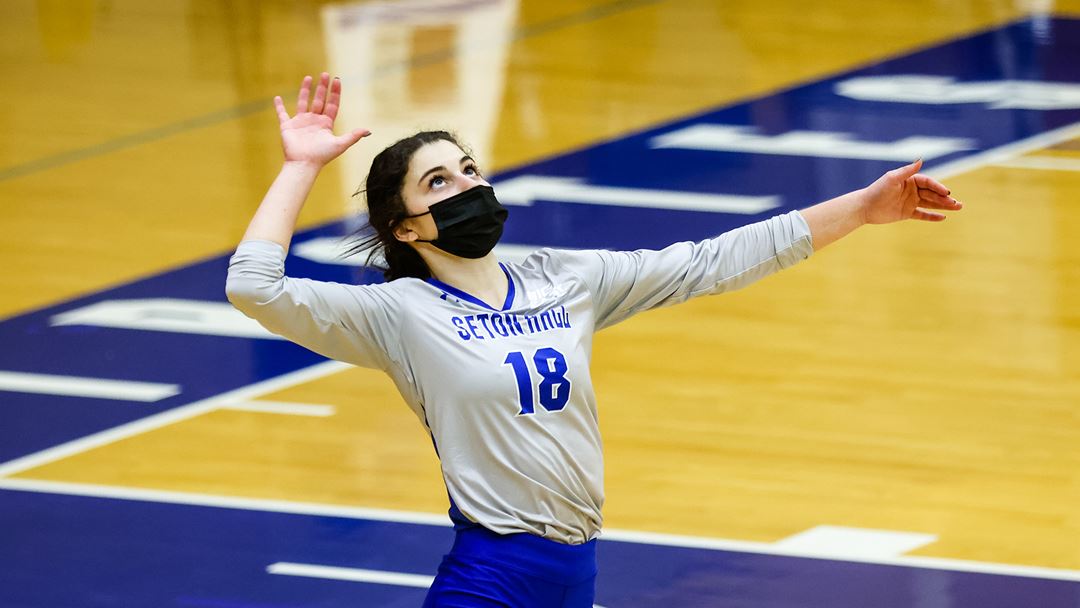 The Pirates traveled to UConn to close out the regular season but couldn’t end with a win. The Pirates end their season with a 4-7 record and a 2-6 record in conference play.

On Friday night the Pirates dropped the match 3-0 to the Huskies. During the first set, UConn came out strong offensively with an early 12-3 lead. The Pirates regained some momentum from Amanda Rachwal and Tsvetelina Ilieva, but ultimately lost the first set 25-15. During the second set, the Pirates were able to keep it close until point 15 when the Huskies regained control. They scored the next six points to take it 20-16. The Pirates continued to rally but again it wasn’t enough, and they lost the second set 25-22. The Huskies opened the third set with an early lead, but the Hall responded with 10-1 scoring run to take the lead 11-6.

Yet UConn bounced back to then tie it up at 16 each. It was a close race to the finish with both team trading kills, but the Huskies were able to score two of the last three point to win the match 25-23. In every area that mattered on Friday, the Huskies dominated the Hall. UConn tallied 42 kills, 53 digs, nine blocks and with an attack percentage of .220. Whereas the Pirates had 23 kills, 45 digs, eight team blocks, and an attack percentage of .031.

Once again, we saw an outstanding performance from the freshmen during Friday’s outing. Taylor Jakubowski finished just one assist shy of a double-double but ended the match with nine assists and 11 digs. However, the top offensive threat for the Hall in this matchup was sophomore Perri Lucas who finished with nine kills, seven digs and two blocks. Sophomore Raygan Murray led all players on both sides with 12 digs to go along with four assists which continues to make her a standout as a candidate for Big East Libero of the Year.

Moving to Saturday night, the Pirates were able to take the second set but ending up losing 3-1. In the first set, the Pirates were able to keep it close until the Huskies erupted with a 7-2 run to control the set. Then when the score was at 17-14, UConn went on another scoring run to end the set at 25-17. The Hall then came out in the second set with one of the strongest offensive performances of the weekend. With the score at 8-7, the Pirates went on their own scoring run to make it 13-7. Decisive kills by Rachwal, Ilieva, and Reagan Hopp led the Pirates to clinch the second set 25-17. Both the third and fourth sets were strong performances from the Hall, but UConn edged out the win both times winning the third set 25-18 and the fourth 25-21.

Once again in every area that mattered on Saturday, the Huskies narrowly beat out the Hall. The UConn tallied 59 kills, 64 digs, six blocks with an attack percentage of .348. The Pirates recorded 52 kills, 59 digs, five blocks and an attack percentage of .236. Sophomore Hopp led the offensive effort on Saturday with 14 kills and a .464 attack percentage. Jakubowski recorded a double-double with 20 assists and 17 digs. With that double double, she has now recorded a double-double in seven of her first 11 collegiate matches. Murray again led everyone with 21 digs to go along with four assists. She now has reached the 20 digs mark in a match for the fourth time this season and seventh time in her career.

While the season didn’t turn out the way the Hall planned, looking ahead the Pirates have an enormous amount of talent returning and look forward to getting to play again in the fall.

Madi Travisano can be reached at madisyn.travisano@student.shu.edu.