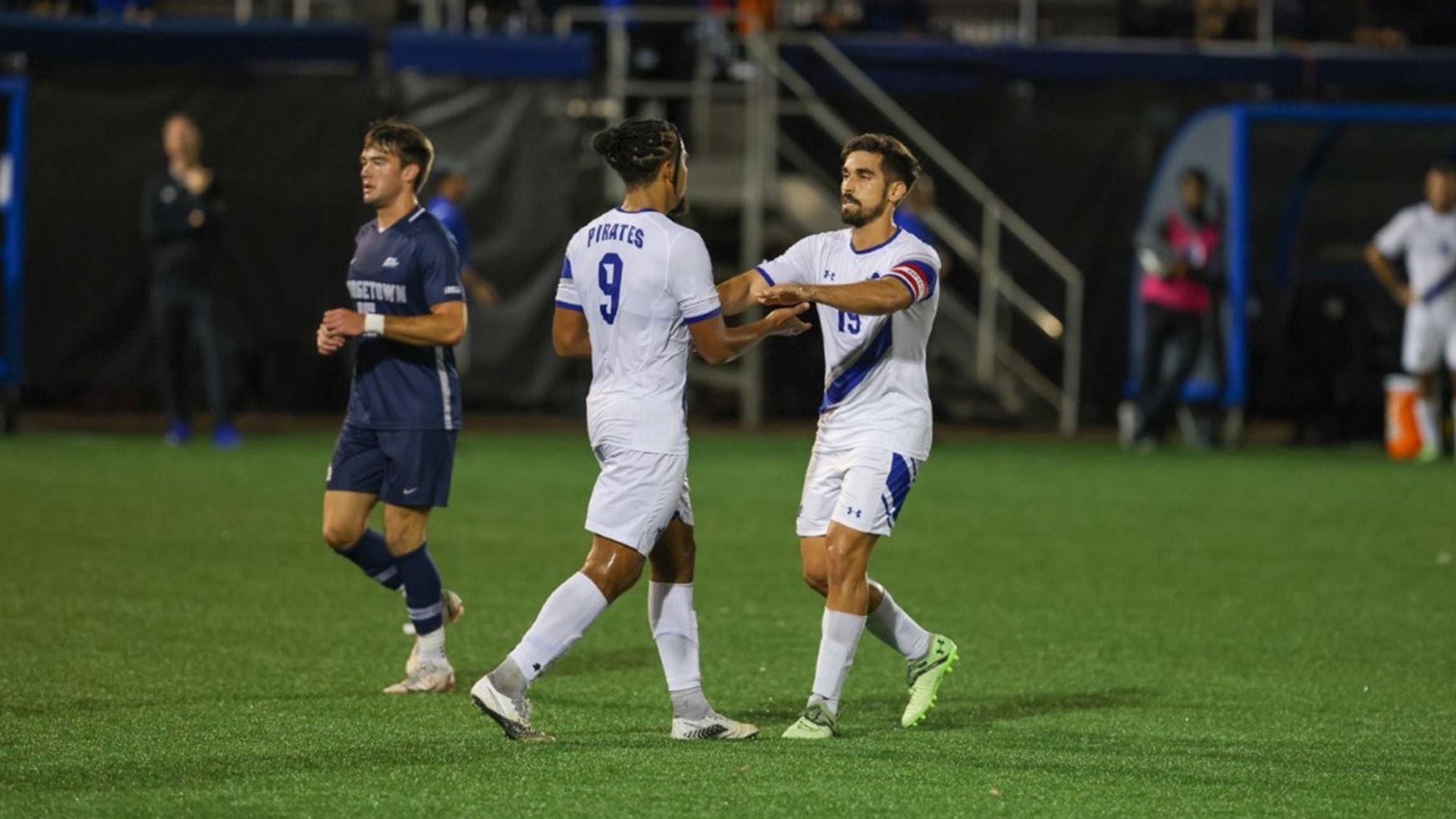 Georgetown opened up the game pressuring heavily. A misplay by CJ Tibbling led to a great chance for the Hoyas around the 12th minute, but Andreas Nota and Luca Dahn combined for a couple of beautiful saves to keep the game level.

11' | Nota with a pair of HUGE stops to keep the game scoreless!#HALLin ⚪️ pic.twitter.com/YTdXbRyYmo

Seton Hall started gain a little bit of pressure after the first goal from Zach Riviere, but the Hoyas shut that down immediately. Joe DaLuz put a Seton Hall defender on skates and slotted the ball bottom corner to put Georgetown up 2-0.

The Hoyas weren’t done, though. Will Sands and Daniel Wu tallied a pair more to put Georgetown up 4-0 by the end of the first half.

This started resulting in some frustration fouls by the Pirates. Mans Saebbo shoved a Georgetown player in the back, resulting in a yellow card. Luca Dahn also committed a reckless foul and received a yellow card of his own.

The Pirates attack in the first half was limited at best. They had four shots, three on target, but none challenged Giannis Nikopolidis, who was between the sticks for Georgetown. The Hoyas overwhelmed the Pirates in that entire first half.

The second half was much more even than the first, despite subbing out Nota. Coach Lindberg opted to put junior Hannes Ronnholmen in between the pipes, and Seton Hall started putting a little more pressure on Georgetown to begin.

However, this momentum was paused early after an apparent ankle injury to starting left back Denis Kelmendi. He had to be helped off the field by trainers and did not return to the game.

The Pirates quickly regrouped and launched their first dangerous attack of the game. Tibbling got the ball on the inside and made a couple of nifty dribble moves before being forced to get the ball outside. Seton Hall then crossed the ball back inside, but Nikopolidis came off his line to catch it, and the Pirates fouled him, bringing the attack to a halt.

This pressure was maintained for large parts of the second half, though. Georgetown’s best chance came on a shot that bounced off the inside of the post and out from Kyle Linhares, but it was really their only chance.

Tibbling put the Pirates on the scoreboard with a couple of late goals, getting his second and third goals of the season. The first was a nice strike into the bottom left corner of the net. Nikopolidis got a hand to it but couldn’t quite keep it out of the net.

The second was a powerful header into the top right corner off of a beautiful pass from Raz Amir.

Fouls killed the Pirates in this matchup. Georgetown only committed three fouls in the whole 90 minutes; Seton Hall committed five times that much with 15. Seton Hall also had a staggering six yellow cards, as the Pirates were just too physical, and the referees penalized them for it.

Also, in the first half, Seton Hall’s offense seemed disorganized at best. They would simply do their best to corral the ball from Georgetown and immediately boot the ball up the field, straight back to Georgetown. From there, the Hoyas would reset and restart their offense.

Pirates fall short against the Hoyas. Back at it on Saturday at home against Xavier!#HALLin ⚪️

The men’s soccer team will be back in action on Saturday against Xavier. Be sure to tune into 89.5 FM WSOU to hear Rony Jerez and Michael Stamm bring you all the action.