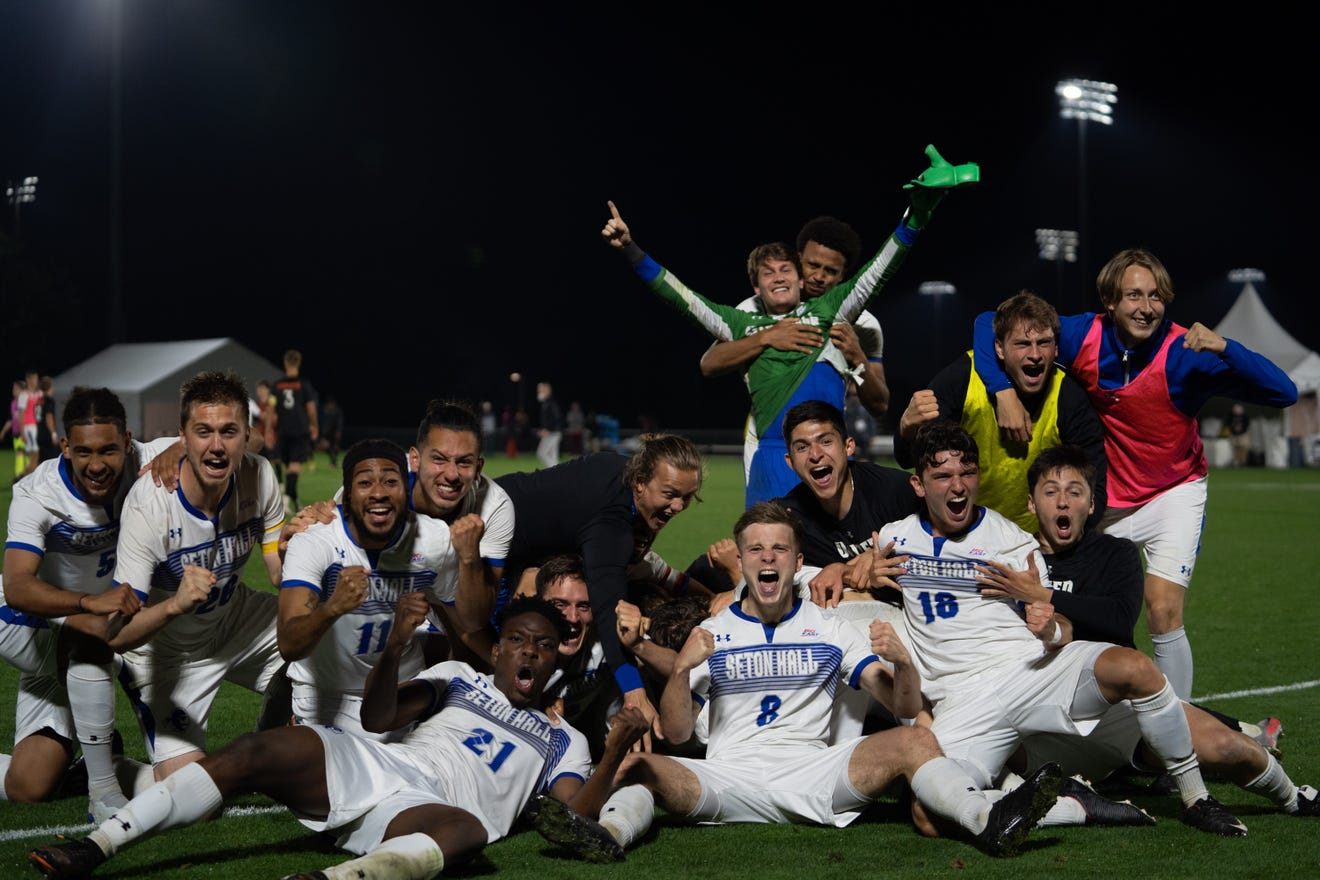 Get ready to tell your children and grandkids where you were the night of May 6th, 2021. The Seton Hall Pirates took down Virginia Tech in the Sweet Sixteen, in what was one of the greatest games ever played in Seton Hall sports history. With the win, the Pirates will advance to the Elite Eight for the first time since 1988.

The game started off in a very interesting fashion. Virginia Tech jumped out to an early 1-0 lead, after a Seton Hall own goal, credited to VT’s Nick Blacklock at 14’. That was the only goal scored by either team for the majority of the first half, and it was the only shot on goal Virginia Tech managed to get all half.

On the flipside, Seton Hall dominated time of possession in the first, and got off eight shots on goal. Despite the Pirates’ good looks, they had the misfortune of meeting a brick wall inside the net, in the form of one Matt Zambetti. Zambetti utterly dominated in the net in the early going for the Hokies, with six saves through just the first twenty minutes of the match.

However, just when the half was winding down, and it seemed like the Hokies would go into the break holding that 1-0 lead, Seton Hall busted out a jackhammer, and took down that brick wall in the opposing net. That jackhammer? Mo Williams. Williams sent home a header in the 44th minute, with only 16 seconds left on the clock. That goal was Williams’ fourth of the season. The clutch goal set everything even at one when the second half came around.

As the second half started, it looked eerily similar to how the first half began. Just 10 minutes in, at the 55th minute, Blacklock found the back of the net again for Virginia Tech on an absolutely gorgeous goal, giving them a 2-1 advantage on the scoreboard.

The Hokies took that lead and rode with it for the majority of the half. With nine minutes left in regulation, things were starting to look slightly bleak for the Pirates. Then, chaos ensued. In the 81st minute, Andrea Borg knocked home an incredibly clutch goal to even the score at two. His first of the season, and one that could not have come at a more opportune time. Then, just thirty seconds later, the Hokies leading goal-scorer, Jacob Labovitz, received his second yellow card of the game after fouling the Pirates’ Luca Dahn.

In just a mere half-minute window, the Pirates steered their ship against the tide, and began building momentum. Regulation ended with neither team being able to net another score, kicking off the first of two overtime periods. Both teams played exceptionally during the two ten-minute overtimes and wound-up drawing. From there, the two teams moved on to a penalty kick shootout, to clinch a spot in the Elite Eight.

Madness ensued in the shootout. After the regulation five shots for each team, they were knotted at 4-4. This moved the shootout into sudden death. The two teams traded blows, until Virginia Tech’s Chris Little came up short and hit the post on his penalty shot. Tied 6-6, Seton Hall had their destiny in their hands, and simply needed to find the back of the net. And so walked up, Andreas Nota, the goalie. Nota lined up to take the potential game-winning penalty kick, after already stopping two shots in the shootout. The All-Big East Second Teamer proved that he could in fact, do more to help the Pirates take home a W, and drilled his shot, winning the shootout 7-6 for the Pirates, and in turn, the match.

Earlier this season, @SHUMSOC head coach Andreas Lindberg told me his keeper, Andreas Nota, had "serious stones." The guy's proven it in net. Tonight, he called his shot and knocked in an Elite Eight clinching penalty kick. Now, that's some ridiculous cojones right there. Legend.

It’s near impossible to replicate the energy and wildness of the game in writing, but it was without a doubt, one of the most electric sporting events any Seton Hall Pirate team has ever been a part of. With the win, the Pirates move on to face the No. 3 Indiana Hoosiers in the NCAA Quarterfinals. The lightning in Seton Hall’s proverbial bottle just keeps on crackling. They are truly must-watch entertainment and continue to build on their resume as the best Pirates Men’s Soccer team in decade.

Be sure to stay tuned to WSOU 89.5 FM for all the coverage you need, as the Pirates look to extend their dream season on Monday, May 10.