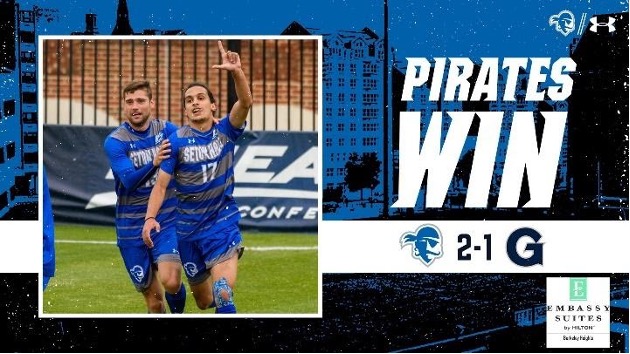 History has officially been made.

For the first time in three decades, the Seton Hall Pirates (9-1-3) are Big East champions.

On a cloudy Saturday afternoon at Shaw Field, the South Orange underdogs dethroned the second-best team in the nation, the Georgetown Hoyas (8-1-2), in a 2-1 thriller. This victory gives the Pirates their fifth conference title and provided the defending national champion Hoyas with both their first loss of the year and first loss to a Big East opponent since Oct. 27, 2018.

Additionally, Seton Hall had not defeated Georgetown in any regular season or postseason match since 2014 and on the Hoyas’s home field since 2006. So how did the Pirates manage to overcome the prior season results (a 2-1 loss and 1-1 draw) and stun the reigning champions on the biggest stage? 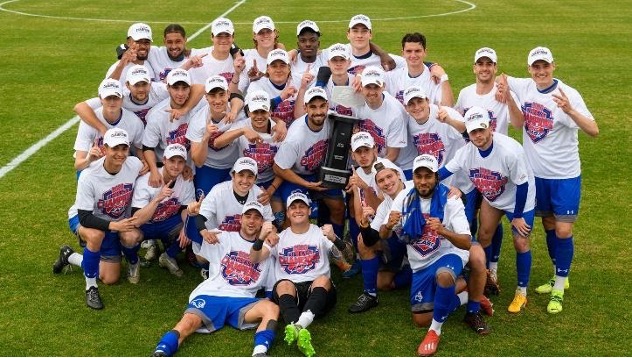 This was a highly contested match from the opening whistle to the final buzzer, as both teams seemed destined for victory during multiple parts of the game. For the first 15 minutes, the Hoyas controlled the tempo and rhythm of play, with the Pirates finding it very difficult to muster any offense behind the potent Georgetown defensive core.

This all changed in the 16th minute, where in back-to-back Big East playoff games, a new face shined the brightest to provide Seton Hall with much needed scoring. Senior Camil Koreichi from France, who only had one assist dating back to the first game of the year in a 3-3 draw to NJIT, broke the nil-nil deadlock off a flashy goal to give the Pirates the early 1-0 advantage.

Assisting on the play were juniors CJ Tibbling (we will get to him in a few minutes) and JP Marin, as Koreichi was able to collect a perfectly placed pass from Tibbling to outduel the conference goalkeeper of the year, Giannis Nikopolidis, and put it far left post for his first goal of the season and first since a match against Army West Point in October 2019.

Camil Koreichi gets the Pirates on the board early in the Championship Final!

Despite this timely play, the Hoyas continued to press on in the physical battle from both sides, with many fouls called that added to the suspense of the match (Pirates had 16 to the Hoyas’ 15 by the conclusion). However, another player on the pitch decided to score his first goal of the year when it mattered the most, Georgetown junior and Piscataway’s own, Zach Riviere.

In the 34th minute, Riviere tied it up 1-1, on assists from senior Paul Rothrock and freshman Marlon Tabora Pounce to end the first half in a stalemate.

The momentum seemed to have changed during the late period Georgetown goal, as the Pirates now had to put one more across in the next 45 minutes to take home the hardware. In a postgame zoom call with reporters, coach Andreas Lindberg thoroughly explained that the first half seemed to belong to the Hoyas despite the tied-up score.

“I give a ton of credit to Georgetown, of all the six halves that we played all year, I think that was [the Hoyas’] best performance,” explained Lindberg when asked if the approach was any different to the previous meetings between the top two squads in the conference. “We were really defeated in the locker room at halftime, but a couple of words were said, and agreed we’re not just here to take part, but here to take over and that was the mentality we played with in the second half.”

The halftime message that Lindberg and the leaders of the team delivered resonated with the entire roster quickly, as the game-winner came less than 20 minutes into the final period. In the 63rd minute, Tibbling delivered as he has throughout the entire season, and blasted a shot with his right foot that snuck past Nikopolidis to put the Pirates ahead by a goal.

The assist on the Tibbling strike came from none other than freshman Mattias Almeida Sundell, who was the hero of the semifinal clash with Marquette and would take home the Big East most outstanding player award after the match. Junior defender Maurice Williams was also named the defensive recipient of this same title for his stellar two-way performance and two goal outbursts in the Marquette game.

Tibbling's sixth goal of the season puts the Pirates up 2-1 in the second half of the #BEfutbol Final! Make it another assist for Almeida Sundell!#HALLin ⚪️ | #BEfutbol pic.twitter.com/VeLz62iSlv

For the remainder of the contest, the Hoyas found themselves in unfamiliar territory in prior years past. Their best chance for an equalizer came in the 68th minute, where Big East midfielder of the year, sophomore Dante Polvara, attempted a penalty kick on senior goalie Andreas Nota.

Nota came up victorious and showcased his game-changing reflexes after lunging for a right foot rocket from Polvara. The Italian goalkeeper would finish the day with three saves, but none more important than this highlight reel stop that would push the Pirates over the finish line in the match.

“Being able to save a penalty and win the game on that save was just amazing. I felt goosebumps for the rest of the game, and that adrenaline is still in me,” explained Nota immediately after in the postgame press interviews. “The amount of adrenaline you get after a PK save, almost like how a striker scores, you just feel invincible. [After this], I knew my team was going to be there for me, and me together with my team, were going to win this game.”

Nota with a beautiful PK stop and the Pirates' defense holds the lead!#HALLin ⚪ pic.twitter.com/klYmw6nwkY

This save, along with the Tibbling goal, provided enough energy needed to shut down the Hoyas for the remainder for the game and bring home a title back to South Orange, N.J. in coach Lindberg’s third season at the helm. The match was filled with emotions from the beginning, as the entire team and staff also paid tribute to the late Pirate legend, Peter Scavo, by having his retired jersey on the sidelines for players and coaches alike to see.

“Peter was obviously a massive part of the program back in the day, way before my time, but I know how important it was to have his jersey next to us the whole game,” said Lindberg when asked about the gesture the entire program took part in showcasing before the match begun.

Reflecting on this long-awaited title that is now back at the Hall, the diverse group of players, whom he recruited from all over the world, reached the promised land sooner than expected, an accomplishment Lindberg will surely always be grateful for when his tenure in South Orange, N.J. someday comes to a close.

“I believe that we assembled a great staff and group of players. Everyone just clicked and worked hard,” added the head coach with pure happiness prevalent in his voice. “I don’t think I’ve ever been a part of such a close-knit group of kids.”

Nota solidified his coach’s message a few minutes after: “I want to repeat this is not just a group or a team. This is a family and a brotherhood. I love all of them.”

The 2021 Big East champions will now turn their attention to one last challenge this season: the NCAA tournament beginning on Thursday, April 29 in North Carolina. After coming out of Washington D.C with a win against Marquette and the defending national title holders, the Pirates have automatically clinched their first NCAA tournament bid since 2005.

The sky is the limit for this incredible group of players that have defied the odds in a COVID-19 riddled season filled with adversity around every corner. No matter what happens in North Carolina two weeks from now, destiny has already been fulfilled.