Recap: No. 11 Pirate advance to Big East Championship after 4-1 win 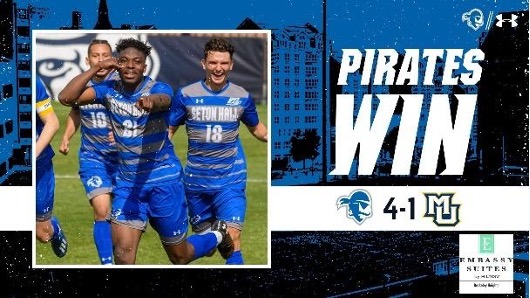 On Thursday afternoon, No. 2 seed (East) Seton Hall defeated No. 1 seed (Midwest) Marquette, 4-1, to advance to the Big East championship on Saturday for the first time since 2004. Both conference foes had not played since March 27, but the Pirates did not show any signs of slowing down as they exploded for a season high four goals in the semifinal showdown.

In one of the most complete performances Seton Hall delivered the entire season, the scoring party began five minutes into the match, with freshman Mattias Sundell delivering a 25-yard blast that found the top right corner of the net to give the Pirates an early 1-0 advantage. CJ Tibbling collected the assist on Sundell’s first goal of the year, which helped kickstart the offensive domination that lasted throughout the remainder of the contest.

The second goal came shortly after, this time from junior defender Maurice Williams in the ninth minute, who finished with his second header in consecutive games off assists from sophomore James Boote and Sundell.

The action started from a free kick that broke down the Marquette’s defense and resulted in a 2-0 lead only ten minutes into the game. Williams ran over to his fellow Seton Hall teammates on the sidelines while performing a memorable dialing of an airphone for his celebration.

Williams finds the back of the net for the Pirates! Credit Almeida Sundell and James Boote on the assists!#HALLin 🔵⚪️ | #BEfutbol pic.twitter.com/hSbHInjwbq

The rest of the half was very one sided, as senior goalkeeper Andreas Nota (six saves) faced limited scoring opportunities from the Marquette strikers. The Golden Eagles’ most potent forward, Lukas Sunesson, only mustered one shot on net through the full 90 minutes and did not pick up an assist until the team’s lone goal later in the match. In particular, the center back duo of Williams and junior Luca Dahn were stellar on the defensive end, giving Marquette no room to operate as they tried to advance past the Seton Hall defense.

With a comfortable 2-0 lead starting the second period, the Pirates were far from finished on the score sheet. In the 59th minute, Williams collected his second goal and header on the day off a perfectly placed pass from Boote off a free kick to extend the deficit to three. Set pieces are a focal point in the Pirates’ offense, and today was a prime example of why Boote is one of the most lethal distributors in the entire Big East (all seven of his assists have come off set pieces this year). The sophomore from England showcased all game why he deserved a spot on one of the all-conference teams alongside his five other teammates.

The last Seton Hall goal of the game came just one minute after, with Tibbling scoring off a laser from his left foot to give the squad a 4-0 lead and added to his goal total on the year (five).

Sundell collected his second assist of the match, just adding to his first breakout performance in a Pirates uniform. However, Marquette would avoid a Nota shutout and break their scoring drought in the 72nd minute, with redshirt junior Sam Thornton putting one home to end the scoring at 4-1.

Despite the scoring outburst from the Pirates, the entire match was a chippy affair from start to finish, but Seton Hall was still able to control both ends of the field. Every challenge for balls in play were physical from both squads, with this best displayed during a Paavo Riihijarvi collision with a Golden Eagle that caused both players to miss time before the end of the first half. Marquette also drew a game high four yellow cards to Seton Hall’s one, but the Pirates did collect a red card (freshman Jake Barrett) during the waning minutes of the second half.

Next up for the historic soccer team is the highly anticipated third game of the year against the No. 1seeded (East) Georgetown Hoyas on their home field on Saturday at 3:00 p.m. During the first two clashes of the regular season, the Pirates lost in an overtime thriller, 2-1, on March 3, and tied on March 20, 1-1. This season has been 17 years in the making, and it all comes down to 90 more minutes this Saturday afternoon to crown the next Big East champion.