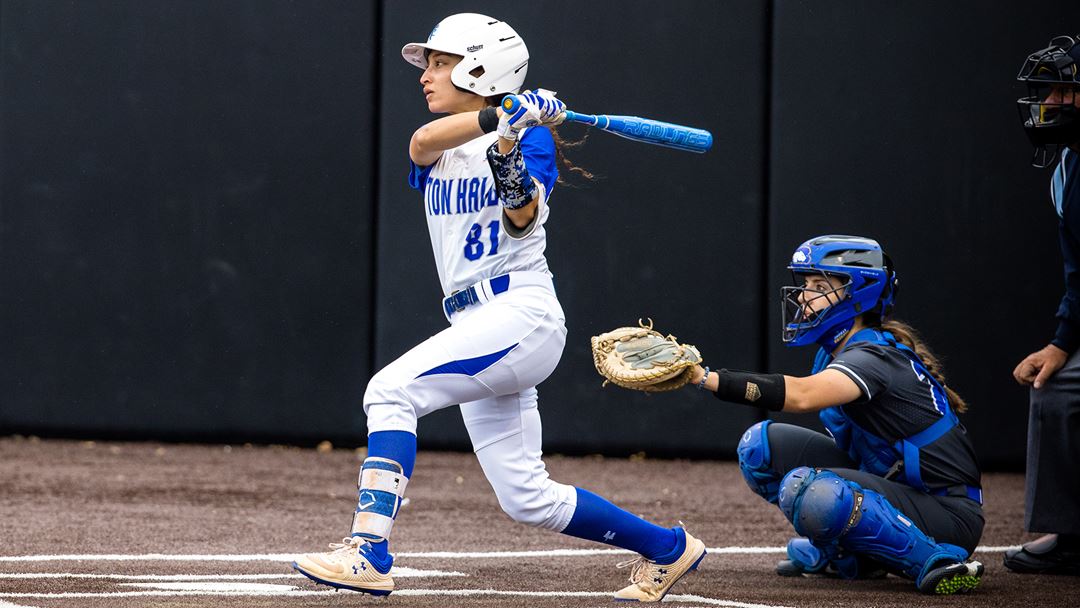 The Seton Hall Pirates Softball team had a rough Easter weekend, dropping all three games of their road trip to Omaha, Neb. to face the Creighton Bluejays. The series kicked off on Friday with a doubleheader. Creighton took the first game by a score of 9-4. The Pirates jumped out to an early 2-0 in the second behind a two-run home run by sophomore Abby Wingo, her first long-ball of the season.

From there on, the two teams battled, and the game was close headed into the sixth, with Creighton holding a 6-4 lead. It was there however that the Bluejays pulled away, putting up three insurance runs before shutting out the Pirates in the top frame of the seventh for the victory.

Despite the loss, Seton Hall’s Shelby Smith had a career day on the mound, fanning a career-high 12 batters. Creighton was led offensively by sophomore Kailey Wilson, who went three for four with two RBIs. In the second game, the Bluejays came out and dominated from the get-go. They took a 5-0 lead into the seventh inning, and despite a late rally from the Pirates, walked away with a 5-2 victory, sweeping the doubleheader. The Bluejays were led again by Wilson, who found a way to top her 3-4 performance at the plate in the first game. She went two for two with two home runs, knocking in three of Creighton’s five runs.

It was a day of home runs for the Blue Jays, as the other runs came from a 2-run big fly off the bat of freshman center fielder Cayla Nielsen in the bottom of the sixth. Seton Hall was lead at the plate by Smith, who went 2-4 and had an RBI.

Smith shoots one through the right side for the Pirates' second run of the inning!#HALLin ⚪️ pic.twitter.com/WCpugQpzEF

The Pirates and Bluejays squared off for a third time on Saturday afternoon. It was an exciting back-and-forth battle that resulted in a 7-6 Creighton victory. The Blue Jays jumped out to a 3-0 lead in the third, but the Pirates immediately tied it up with a three-run fourth. Then in the fifth, Creighton tacked on two more runs. Once again, Seton Hall immediately matched the tally with a two-run sixth.

Entering the seventh, the score was tied at six. The Pirates couldn’t get a run across in the top half of the inning, leaving the door open for Creighton to walk it off with a run. And walk it off they did. With the bases loaded and two out, Bluejay freshman Emma Rosonke grounded the ball to short. An untimely error by the Pirates let Rosonke reach base safely and knocked in the winning run.

With the win, Creighton Head Coach Brent Vigness picked up the 800th victory of his tenure at Creighton, further extending his record as the winningest coach in program history.

In the loss, Seton Hall had strong performances from sisters Kiana and Jaden Tate. Kiana went two for two with an RBI, and Jaden went two for three with a two-run homer. For Creighton, Kailey Wilson stayed red-hot at the plate, going 2-3, but they got a huge performance from Freshman third baseman Madeline Vejvoda. She went three for four on the day and tallied three RBIs.

The series sweep continues the Pirates’ struggles away from home. They hold a 6-4 record at home but have yet to win a game outside of South Orange this year. They now stand 0-8 in away games, and 0-3 in neutral site games. Luckily for the Pirates, they’ll return back home for their next matchup, as they’ll face Georgetown in a three-game series on April 10 and 11. Be sure to tune in to WSOU then for all the coverage you need.