Preview: No. 11 Seton Hall takes on No. 2 Georgetown in the Big East Championship

The matchup the Big East faithful has been waiting for is finally here. Seton Hall and Georgetown have met three times in the conference tournament semifinals in the past (1988, 1994, and 2004). Never have these two storied programs clashed in the biggest game of them all. This will change in a few short hours.

At 3:00 p.m., the Pirates and the Hoyas will compete for a conference championship at Shaw Field in Washington D.C. While Georgetown may have the home field advantage, these two teams are all too familiar with each other this season, having already played in two thrillers back in March.

On March 2, the Hoyas took game one at home against the Pirates, a 2-1 OT victory that could have went much differently by the match’s end. All-Big East first team selection and junior CJ Tibbling opened the scoring at the 46-minute mark to give the Pirates an early 1-0 lead, but the Hoyas’ offensive superstar and conference midfielder of the year, sophomore Dante Polvara, would score two unanswered goals to break the stingy Seton Hall defense and give Georgetown the down to the wire win. 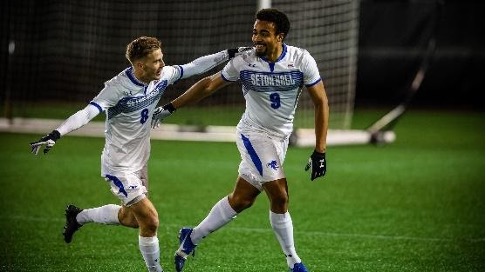 On March 20, 18 days later, the two conference rivals would meet once again but this time at Owen T. Carroll field in front of some of the Pirate fans. This time, the two powerhouses would draw, 1-1, in one of the most tightly contested games of the whole season.

In the 74th minute, senior captain and first team all-conference Derek Dodson scored off a rebound to put the Hoyas out in front by a goal. However, sophomore Eden O’Leary converted on the equalizer in the 81st minute from a James Boote assist to knot the game up at one. Neither team could crack the other in overtime, so the match resulted in the 1-1 tie.

Another look at the HUGE equalizer from Eden O'Leary!#HALLin 🔵⚪ pic.twitter.com/GoS1iR3YSO

Since these two contests, both Seton Hall (8-1-3) and Georgetown (8-0-2) have continued their winning ways, now with one last game to prove who will be crowned the best of the best in the Big East. The Hoyas are the defending national and Big East champions from 2019 and have reached the conference final the last four times, which has made them the squad to beat throughout the entire year.

While the Pirates have not reached the conference final in 17 years (2004), they have not won a title in two decades (1991). During the year, the favored Hoyas led the East division with the Pirates trailing right behind during the regular season, the semifinal matchups were a whole different ballgame. Georgetown avoided an upset against Midwest No. 2 seed, Creighton, by stealing a 1-0 victory at home.

They needed tight defense and big saves down the stretch to keep the potent Bluejays attack at bay, and junior Joe DaLuz scored his first career goal in the Georgetown blue and gray to advance to the final round.

During the second game of the semifinals, the Pirates scored a season high four goals against the Midwest No. 1 seed, Marquette, in a 4-1 rout of the Golden Eagles. In the first nine minutes of the match, freshman Mattias Almeida Sundell struck for his first career goal in the sixth minute and junior Maurice Williams drove in a header in the ninth minute to give Seton Hall the early advantage.

In the second half, Williams converted on his second header and goal of the day at the 59th minute, and Tibbling finished off the scoring with a goal of his own one minute later (60th).

Although both the Hoyas and Pirates had different experiences thus far in the Big East Tournament, today’s championship game will be a star-studded battle between some of the brightest players in the nation.

Between the pipes, Seton Hall’s Andreas Nota and Georgetown’s Giannis Nikopolidis will be locked into another prolific duel of two of the best goalkeepers in the nation. Nota earned a spot on the All-Big East Second Team after putting up monster numbers this year, including a chance to break the Pirates’ single season record for a goals-against-average (currently Nota is at 0.63) and five shutouts. Nikopolidis took home the conference Goalkeeper of the Year award this season while tallying a conference leading 15 saves and four shutouts.

Once again, WSOU Sports talked with Nota to hear from one of the most important leaders on the squad and what has transpired from his perspective both on and off the pitch. When asked about the Pirates’ mindset playing the Hoyas for the third and final time this year as well as competing against another Big East phenom like Nikopolidis, Nota and the rest of the roster revealed they are up for one last dance against the defending champions.

“We already played Georgetown twice this season, and there were two battles on the field,” explained Nota. “[The two end results] shows how both teams have equal chances of winning the game, and it is always a pleasure playing against the defending national champions.” 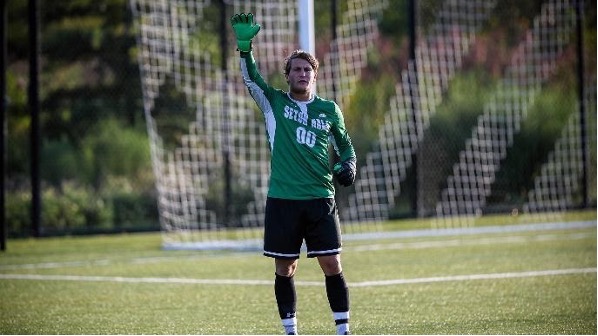 The remainder of both squads are loaded with elite playmaking talent that can erupt at any point, with many of the goal scorers previously mentioned able to change the flow of a match. Besides Tibbling (12 points), and junior JP Marin (eight points) as the top two-point leaders on the Seton Hall roster, sophomore Boote has collected seven assists (with the majority off set pieces) and defender Maurice Williams (three goals and one assist is now tied with Boote for third best on the stat sheet.

Having players like Williams who can take out the opposing team’s best players while still scoring goals is vital to a championship contender, and addition to other members of the defensive core like junior Luca Dahn (five points) and sophomore Johannes Pex (five points), the Pirates can keep the ball out of the net while scoring at an efficient rate.

This is also a physical Pirates team that will contest any challenge for a ball on the pitch, as best displayed by key players such as junior Paavo Riihijarvi (two goals) and throughout the rest of the lineup. To put the icing on the cake, coach Andreas Lindberg now has another offensive threat in freshman Mattias Almeida Sundell, who shattered expectations in the semifinals.

Because this is the most complete team Seton Hall has had in decades, the Pirates have overcome adversity time and time again throughout the COVID riddled season, especially not playing since the end of March before the Marquette victory. Despite the pause, the match was strictly business for the 90 minutes.

“I honestly think that not being able to play since March 27 did not influence our game at all,” said Nota. “We started the game pretty strong and went after them from the first whistle. The early goals [did] help our game and conditioned the whole match but the team and the coaches both dealt perfectly with the quarantine, and we were able to have a great performance.”

On the Georgetown side, Polvara is currently at an outstanding 16 points on the year, Dodson and senior Jacob Montes are tied for second with seven points, and senior Paul Rothrock is fourth with six points. When the conference awards were released on Wednesday, the Hoyas led the entire Big East with three major winners and eight all-conference honors, a feat that showcases one of the reasons why this squad were the national champions in 2019.

Besides the Nota-Nikopolidis battle in goal, one other marquee matchup to keep an eye on is the center back pairing of Williams and Dahn, and how they will limit players like Polvara who can score at will.

As seen in the Marquette match, the defensive duo held the Golden Eagles’ most dynamic offensive threat, junior Lukas Sunesson, to one shot on goal and conference freshman of the year, Beto Soto, to only two shots on net. If they can limit the Georgetown offense like they have with the rest of the Big East throughout the season, it will allow for goal scorers like Tibbling and Sundell (even Williams) to put the Pirates over the top.

Emotions will be running high for both teams later today, as only one can be crowned the top soccer program of the Big East. When asked about the Pirates’ morale and the team’s overall excitement at this stage of the playoff run, Nota painted the full picture of where everyone is at mentally.

“It is amazing to have reached the final, and it is such as big honor representing Seton Hall at this high level,” said the goalkeeper. “I feel that the team, and I mean all the players are having a massive impact on this season. If you ever watched one of our games live, you will see that our bench is the best in the nation, and this team/brotherhood relation that we have is what is making the difference.” 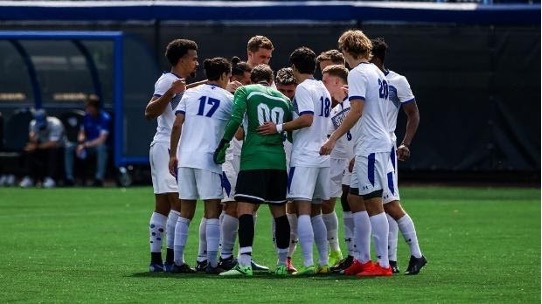 The stage has been set, and first touch is only a few hours away. To cap off today’s special circumstances, the match will be broadcasted on FS2 and the Fox Sports app, with Seton Hall and WSOU graduate John Fanta (’17) and Tom Greaser on the call. Fanta, who covered this team extensively during his collegiate career in South Orange, N.J. is more than ready to provide the commentary for the program’s legendary run at the big stage, whether the match results in a win or loss.

Yesterday, Fanta also talked with WSOU Sports to explain his mentality as the play-by-play voice of the most important game of Seton Hall men’s soccer in decades. 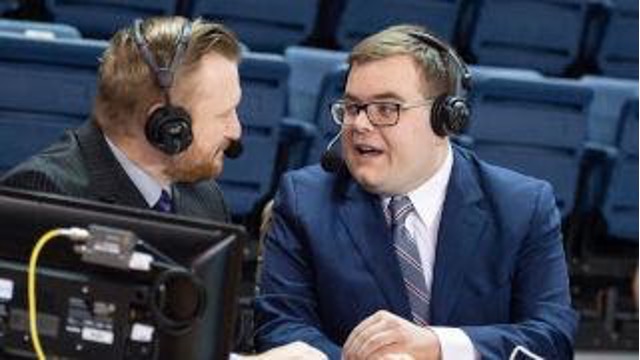 “What [head coach] Andreas Lindberg has done in three seasons at Seton Hall is one of the great turnaround stories in college soccer. He laid a foundation, and now has built it up to the expectations that the program had and succeeded in throughout an amazing era in the late 80’s and early 90’s,” explained Fanta. “When I was a student, I saw how much history was with the program and the alumni base, but many questioned when, if ever, the program could get back to a stage like [today].”

“It will be a thrill to call this one, and I am deeply looking forward to having the Pirates and Hoyas, who as the reigning national champions, I have covered a lot and have grown a deep respect for [head coach] Brian Wiese and what he has done. This is a heavyweight clash.”

“To be the voice of it is a blessing.”

Jonathan Heite can be reached at jonathn.heite@student.shu.edu.