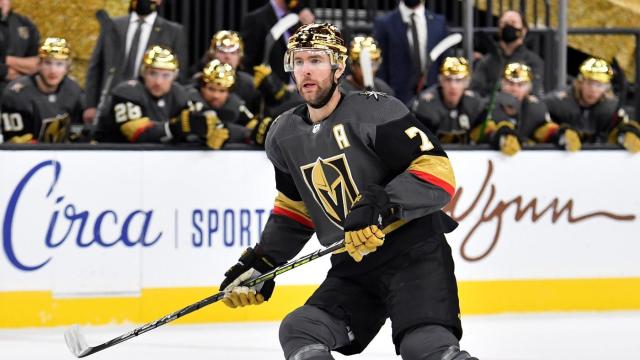 On May 10, hockey fans witnessed potentially the biggest blunder of the NHL season and in the history of a franchise. To be fair that franchise is only four seasons old, but still the Vegas Golden Knights suffered a monumental error this week.

As they looked to close out their third division championship in their first four seasons, they had a huge matchup against the team chasing them in the Colorado Avalanche. Just 15 seconds after taking a one to nothing lead in the first, Knights Carrier and Tuch created a perfect two on zero opportunity to take a two-goal lead. After a give and go inside the blue-line, Alex Tuch had a wide-open net to take a chokehold on the game, division, and the President’s Trophy. Unfortunately for Tuch and the Knights he pulled the shot wide left missing the six-foot wide opening and costing the team greatly.

So, what happens if Tuch does burry that puck and the Knights go up 2-0 against the Avalanche? There was an incredibly high chance that Vegas goes on to win that game. The Vegas Golden Knights finished the season undefeated with a 20-0-0 record when they started a game up 2-0. So how much did this missed goal really cost the Knights?

Well, the odds of Vegas securing one point in that game if they went up 2-0 were astronomical. That one goal that likely would have led to at least one point would have changed everything in the end of season standings. Following Tuch’s miss however, the Avs’ came back to score two goals and win the game by a final score of 2-1. This win, combined with Colorado finishing with two more wins to end the season, resulted in Colorado jumping the Knights in the standings.

Instead of winning the division and President’s Trophy the Knights finished tied with Colorado and saw the Avs’ take the top spot in the league and division on tiebreakers. But potentially more important than standings accolades is the fact that the Knights lost home ice advantage. The Knights would have had home ice advantage for the entirety of the playoffs, but now Colorado will play host in what could be a second-round matchup between the two. Just to add insult to injury Tuch and his teammates lost out on their share of the $350,000 bonus that gets distributed amongst the league’s top franchise at the end of the season.

Nothing will widen the eyes of a National Hockey League player like a wide-open net with the puck on their stick from short range. But nothing will sink the heart of an NHL player like missing this golden opportunity that could have secured so much for their franchise. Tuch’s missed shot would have put his team up 2-0, a lead that led to a win for the team every single time they had it this season. The Avs’ winning that night and in the days that followed cost the Vegas Golden Knights their third division title, first President’s Trophy, the bonus that comes with it, and home ice advantage throughout the playoffs. All those accolades were just one point, and one goal away.