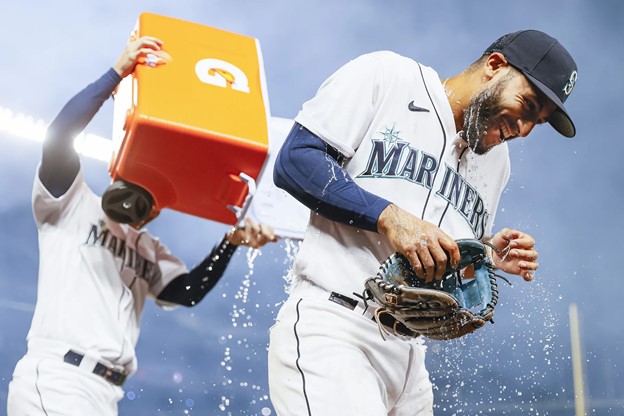 “Objects in the mirror are closer than they appear,” and their name is the Seattle Mariners. They’ve been hot. In their last 15 games, they’re 9-6, which included a sweep against the Athletics on the road and they took two of three games against the AL West-leading Houston Astros. For the first time since May 8, they are now second in the AL West, jumping Oakland in the standings after their win against the Arizona Diamondbacks.

Late game heroics defined the Mariners’ success last week. In their first win over the Astros on Aug. 31, former Astro Abraham Toro hit a grand slam in the eighth to give the Mariners all their runs. Their last series against Arizona featured two wins in extra innings.

In Friday’s match, Jarred Kelenic recorded his third RBI of the game when he hit an RBI single in the 10th to give Seattle the 6-5 win. Two days later, the Mariners erupted for SEVEN runs in the 11th inning, which featured contributions from Toro, Kyle Seager and Mitch Haniger.

This week is the most important stretch of Mariners baseball in potentially 20 years. They are in the middle of another three-game series against the Astros, but this time in Houston. Starting Monday, Sept. 13, the Mariners host the Boston Red Sox, who currently hold the second wild card spot and have a three-game lead over the Mariners. This time next week, the Mariners could be on the verge of snapping the longest active playoff drought in the four major North American sports or they could unofficially be out of the playoff race.

The Athletics are the victims to the Mariners’ late-season push. They got swept by them in late August and are now wondering what went wrong. I anticipated this fall because of their putrid performance against good teams and their roster composition, but it still feels weird. Just under a month ago, the Athletics had a four-game lead over the New York Yankees and held the top wild card spot. Now, they are 3.5 games behind the Yankees and got passed up by four other teams.

Collapses like this are monumental and usually lead to major overhauls, not just to the roster, but to the coaching staff and management. Despite the pessimism I have for this team, it’s not the end of the world, yet. Their final 13 games of the season are against the Mariners and Astros. They essentially control their destiny until the very end.

To not be completely negative towards the Athletics, I want to spotlight Starling Marte again. His bat has stayed consistent from Miami, but his speed on the bases has made an even bigger impact. Despite only playing in Oakland for 33 games, he has already stolen 20 bases and has yet to be caught. With his 20th steal on Aug. 28, he made history, as he became the only player in MLB history to steal 20 bases in both the American and National League in the same season. Before Marte arrived, the Athletics ranked 16th in the league in stolen bases, now they’ve jumped to fifth with 79 stolen bases.

#Athletics Starling Marte is the first payer in MLB history to steal at least 20 bases in two different leagues during the same season.

The weirdest thing is that Houston’s schedule in August wasn’t even difficult. Only eight of their 27 games were against playoff/playoff contending teams and, there was a 13-game stretch where they played the Twins, Rockies, Angels and Royals. I think Houston is talented to coast their way to a division crown, but they need to hit another gear come October if they want to win it all.

In a season full of despair and disappointment, last week should be considered a success for the Angels. They got to play spoiler to the New York Yankees, which the baseball world always enjoys. Even though they split their four-game series against Rangers, Shohei Ohtani pitched a gem in their first win, throwing seven strong innings, striking out eight and only surrendering two runs. The next game, 23-year-old José Suarez threw his first career complete game while only allowing one run. Plus, they at worst will split their upcoming series against the San Diego Padres, taking the first of their two-game series.

José Suarez gave the bullpen a night off. #CarryTheFreight pic.twitter.com/Xj9VXNSKQR

Congratulations Texas Rangers! You now join the Baltimore Orioles and the Arizona Diamondbacks on the list of teams officially eliminated in the playoffs. It has been a longtime coming, but now it’s a matter of formality. On Sept. 2, the Boston Red Sox beat the Tampa Bay Rays 4-0, making them the fifth AL team with 77 wins and officially eliminating the Rangers. It was a long season and might be the beginning of multiple horrible seasons for the Rangers in the immediate future.

I don’t want to dunk on the Rangers too much, so I’ll shout out Glenn Otto, one of the players acquired in the Joey Gallo deal back in July. Otto made his MLB debut on Aug. 27, where he pitched five innings, striking out seven while giving up zero runs. His second start against the Angels on Sept. 3 wasn’t as spectacular but he still only allowed two earned runs in 4.2 innings pitched. Otto might be the first piece to rebuilding a pitching staff that is depleted and lacking in young talent outside of Jack Leiter.