In case you missed the latest and greatest singles, albums, and live shows across New Jersey and New York, never fear because Street Patrol is here! The Eagle has gone through every release and put together the top five in local releases for the past year. There is also a top five list for live shows, and some fun bonus local shoutouts to check out down at the bottom. Check it out, find some new music, and make sure to listen to Street Patrol, Wednesday nights from 8-10pm on 89.5 FM WSOU!

Silence Equals Death - I’ll See You On The Other Side

Track to Check Out: Revolution Rising

Silence Equals Death (SED) is carrying the torch into the new era of hardcore, and are certainly not passing it off anytime soon. Their 2021 release of I’ll See You On The Other Side is fast, brutal, and potent. Beyond the breakdowns and scorching vocals, there are songs filled with life lessons and social commentary.

In an era where metal and hardcore vocals are dominated by pig squealing and incoherent screaming, vocalist Scott Earth brings new life to the table. SED brings the classic New Jersey and New York Hardcore sound with a fresh take. One track alone is enough to make the faint of heart pass out, with the energy on this album being unparalleled to anything I have ever listened to.

The craziest track off the album is by far “Revolution Rising.” In a time of turmoil, this song really sums up what most of the nation is thinking. However, this is a timeless anthem of strength in the adversity and hardcore resilience. Go out and get this album immediately, turn it up to 11, and get ready to run through a wall, because that is the kind of energy radiating out of Silence Equals Death!

Ghostwreck - The City is Gone EP

Track to Check Out: Disaster With A Capital D

The debut EP of NYC- based band Ghostwreck took no time at all to gain traction both online and at radio. Whether you are a fan of punk, metal, or pop, The City is Gone has something for everyone! For a local band the entire album is expertly produced, written, and performed. Songs like “Champagne” have a more mellow feel if that is your thing but of course, the EP also has some face melting metal metalcore with “Disaster With a Capital D”

In the past year there has definitely not been a better freshman effort from any band, anywhere. The level of unity that radiates from this band is unseen in any other first release, whether it be an album, EP, or single. Although metalcore is a genre seemingly past its prime, James, the band’s vocalist, has a crystal clear and unique voice in the metal scene. The band is already reminiscent of metalcore acts such as Bury Tomorrow or Dance Gavin Dance despite not playing a live show yet due to the COVID-19 lockdown.

When these guys are finally able to hit the road, I expect nothing but a meteoric rise up the charts and nothing but high energy shows. Ghostwreck is able to walk the line between writing fun radio hits and heavy metal anthems that will erupt crowds into mosh pits. If you have not heard these 5 songs already, stop reading this article and go turn them on!

Track to Check Out: Russian Winter

For fans of: A Day to Remember, Glassjaw, The Fall of Troy

New music is rumored to be coming in 2022 but for now Shake That Bear (STB) is making a studio-only reunion for the first time since 2013. Their first track released is titled “Russian Winter” and it hits just as hard as the name suggests. “Russian Winter” transcends both metal and post hardcore by providing listeners with a truly fresh take on the genres we have all come to know and love.

The first thing that is striking about this song is how heavy it gets compared to previous STB tracks, with a fresh take on the band’s instrumentals and use of dirtier vocals. I can imagine being in Starland Ballroom when this song comes on and immediately being either thrown to the ground or up in the air. STB truly brings an energy like no one else. Second, this is a song that will hit deep for all of time, the lyrical genius of “Russian Winter” is one that can persist through any time. A true metal song about resilience and keeping your head, STB is writing an anthem for all of us facing adversity in the past year.

If Shake That Bear puts a full length album out, I am going to be the first to buy it. If they make a touring reunion for the first time in 10 years, I will also be the first one right up on the stage at every show. This is a comeback story like no other and certainly a major band to watch out for in the coming years.

Track to Check Out: The Rabbit Hole

For fans of: Amon Amarth, At the Gates, In Flames

With their first full length album release of The Rabbit Hole coming out in 2021, Deadtide has shaken up the melodic death metal scene for sure. This album can be listened from front to back, back to front, or any way in between and will be nothing short of amazing. With a mix of clean vocals and brutal screaming, these lyrics pair perfectly with scorching guitar solos and drum work. This is a band that could tour with Powerwolf, Death, or Judas Priest and fit into the show just as amazingly in each one.

The title track, The Rabbit Hole, is perhaps one of the best melodic death metal songs of all time. It evenly blends all the elements that create this genre, with the vocals and instrumentals varying within the song but all coming together nicely. For fans of a heavier or classic death metal feel, take a listen to “Finish the Nightmare,” Deadtide has been making the rounds at local clubs and bars after this last album and I personally cannot wait to get a circle pit going to these new tracks!

Brick by Brick - Just Look Around (Sick of It All Cover)

Track to Check Out: Just Look Around (Sick of It All Cover)

For fans of: E-Town Concrete, Hatebreed, Sick of It All

An ode to legendary New York band Sick of It All, this track infuses elements of metal into a hardcore banger. Bringing a much heavier sound to the table than classic hardcore bands, Brick by Brick is much more reminiscent of a band such as Hatebreed, with a unique take on “metallic hardcore,” They bring a fresh take to the song by bringing in rap elements as well with a feature from Lord Willin capping off an already blistering track.

In 2021, and going into 2022, this song is a must listen. Keeping in line with punk and hardcore this is a song about unity and brotherhood. Considering the original song was released decades ago, this content is still as potent and fire starting as ever before. Wake up and hear this track!

Silence Equals Death (SED) put on perhaps their best performance of the year at the Upstate Records Showcase in Brooklyn just last month. Once again, Scott Earth outdoes himself engaging the fans and releasing a barrage of extreme metallic hardcore to anyone within a five block radius. Although, the true highlight was Fred Delacruz shredding it on the guitar while wearing a Squid Game mask. Check out this clip from their livestream to get a taste of this band live. (Video credits go to Silence Equals Death and Backroom Studios). 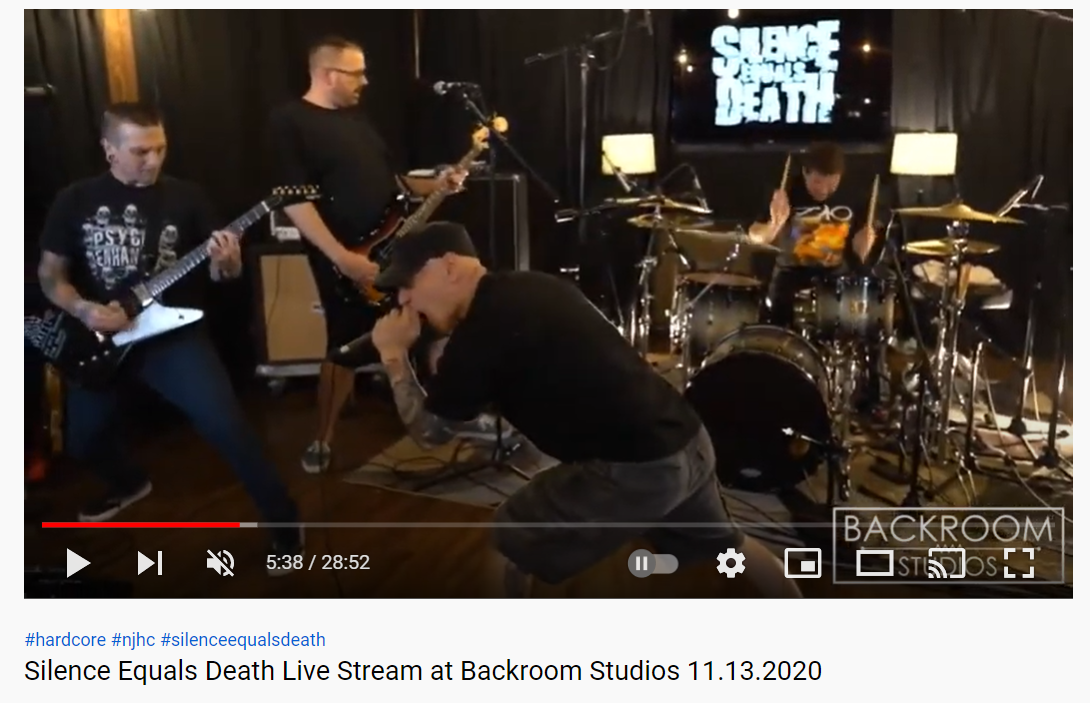 Newcomers to the hardcore scene, Cropsey has made a name for themselves by seemingly playing 500 shows in the past 365 days, with every one being better than the last. The entire band knows how to ignite the crowd and burst into a pure flame of punk rock excitement. The addition of “Sorry Mama” into their sets is an immediate crowd favorite to sing, slam, and scream along to. Being such a young band, it is exciting to see where Cropsey is going to go in 2022! (Video credits go to Fred Delacruz). 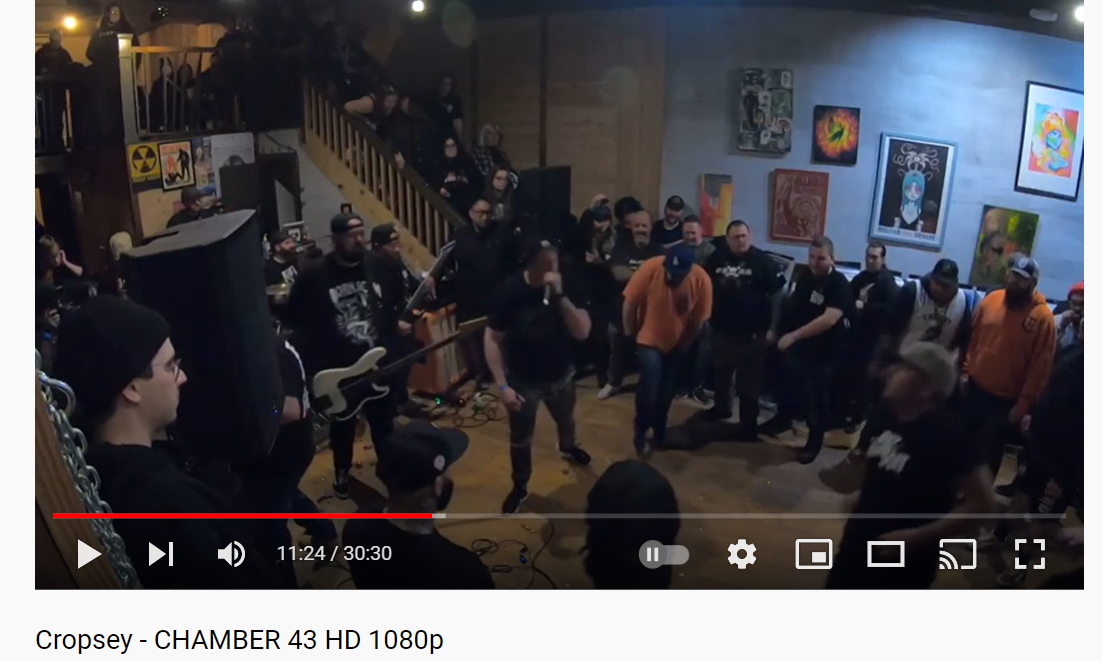 Hardcore crossover act Bushido Code really tore it up at a Stomp Out Abuse benefit show in May. Despite being stuck outside in the rain and the lead singer Mike Ledet driving 10 hours to the show, the band delivered nothing but an unrelenting attack of brutal music. Although their winter tour is wrapping up, keep an eye out for shows in the New York, New Jersey, and Pennsylvania area. Check out this link to the show that got them in the top five! (Video credits go to Mind Decay Productions & Matt Mullany). 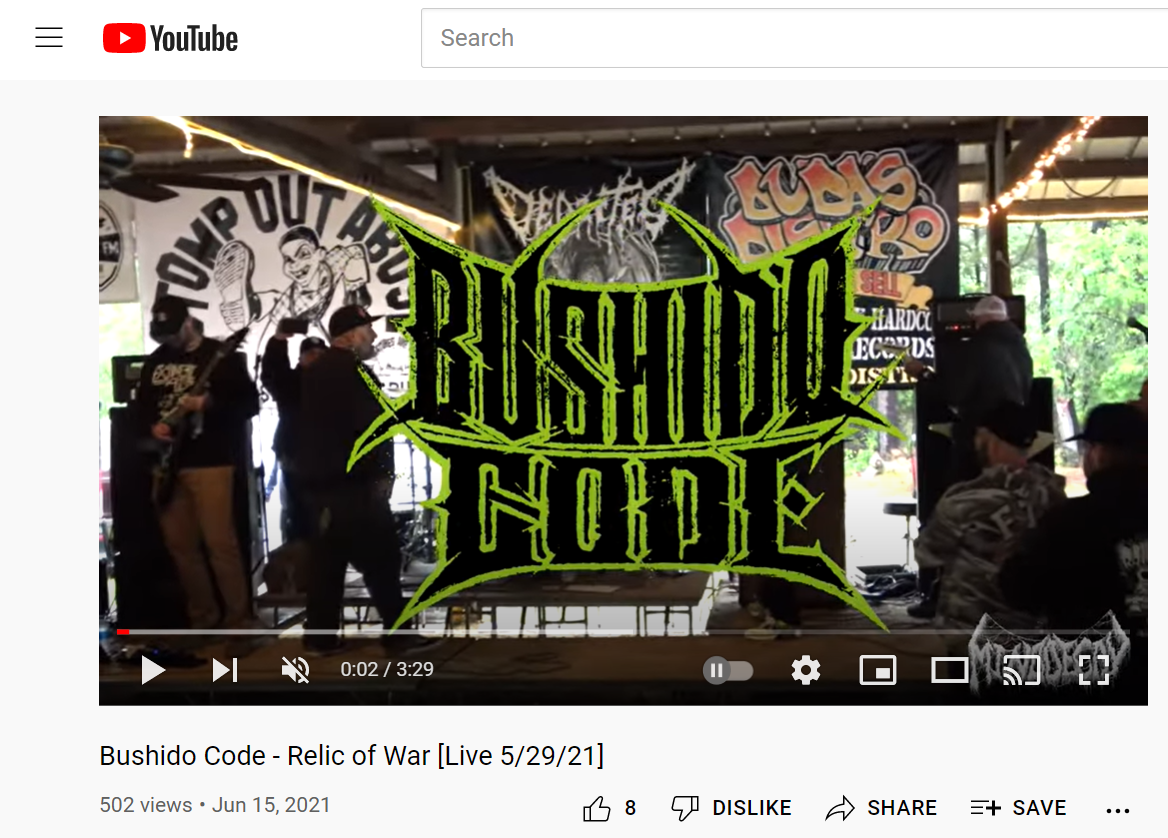 Warring Monk takes the number one spot for best death metal show I have seen in the past year. Lead vocalist Dominic Petrocelli brings a Danzig-esque mystical aura with him when he takes the stage. Singing, screaming, playing guitar, and even an occasional drum solo, he is one musician you need to see before you die. Warring Monk opened this show for another death metal act at Chamber 43 and I was beyond amazed to hear what they produced. Although COVID-19 has delayed their show at a Cluck-U Chicken restaurant, this band is willing to play everywhere and anywhere so I am sure you can see them soon! (Video credits to Warring Monk and Backroom Studios). 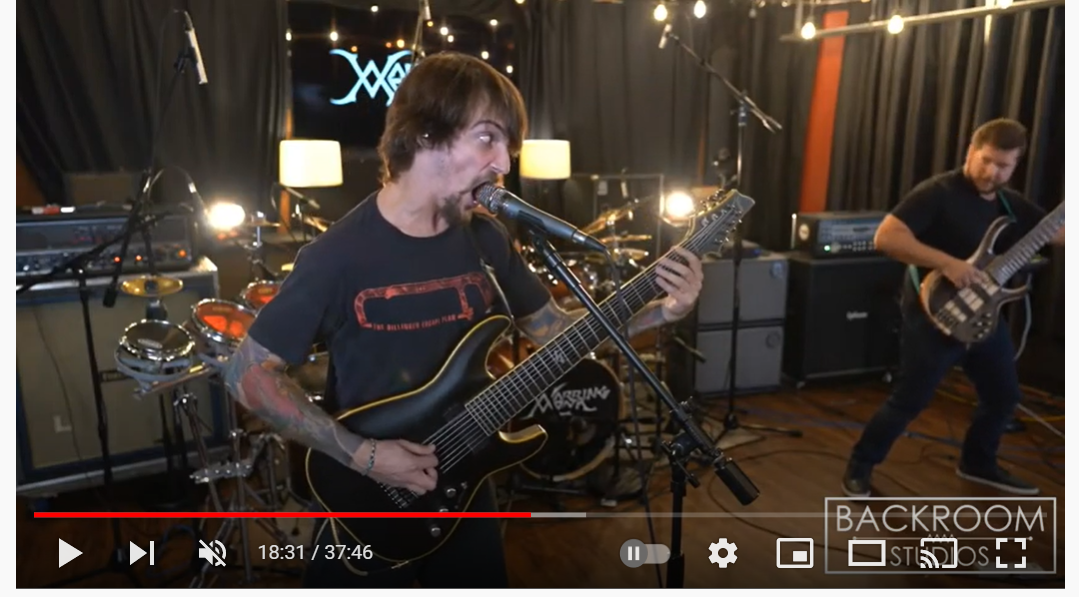 Dumpweed is a band that needs no introduction, as they are quickly becoming a staple in the New Jersey Hardcore scene. Their recent show at Chamber 43 was nothing but high energy, ballistic, punk rock. In a scene that could have been from an early days Black Flag show, kids were jumping off shelves and climbing up the walls in Chamber 43 to get a better view of the band. Dumpweed has a show coming up January 7th at the Stone Pony in Asbury Park. Everything they touch turns to gold and anytime you are in a room with them it is guaranteed to be a good time! (Video credits to Dumpweed and Chamber 43). 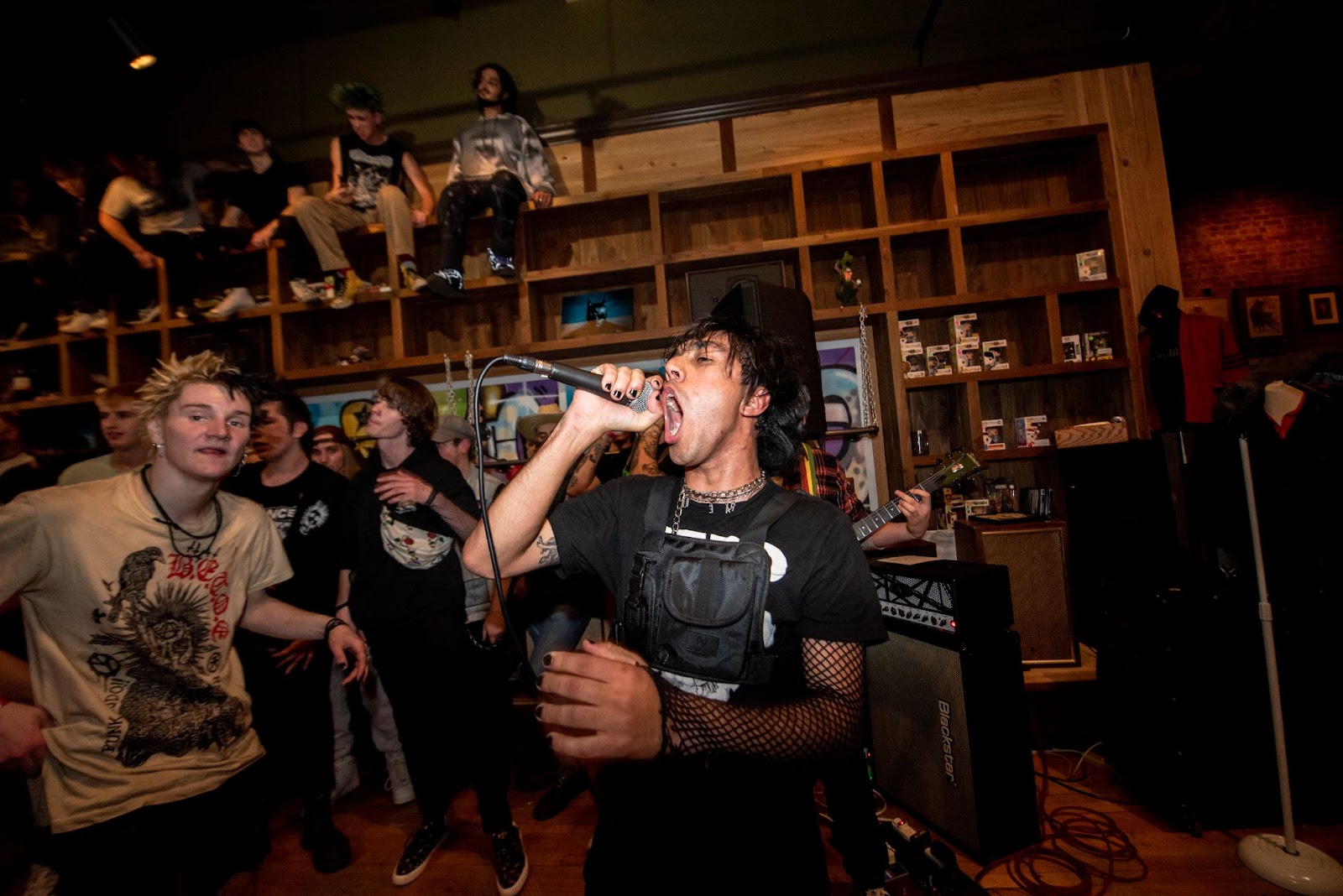 Now closed, Chamber 43 brought nothing but the greatest in punk and metal to downtown New Brunswick. Owners Jimmy, Drew, and David hosted some of the greatest shows of 2021 in the back of a coffee and record shop. Some of these bands included Silence Equals Death, Warring Monk, Cropsey, Dumpweed, and dozens more!

Founded in 2017 by Mario and Kim Cangemi, Upstate Records is now an award winning record label. The killer roster includes Grace, Bushido Code, Silence Equals Death, Brick by Brick and MANY more! Some highlights from this past year include releases from SED and Bushido Code, as well as a label showcase which took place in Brooklyn in November. Stay tuned for big things coming up in 2022!

Jay Baluski and the team at Stomp Out have kept shows alive throughout the various waves of lockdowns. Some of the highlights were shows in parks or pavilions behind VFWs in South Jersey. Keep an eye out for more benefit shows coming up with bands like Cropsey, Silence Equals Death, and Reaching Out appearing on these amazing lineups!

Some quick links to the bands, labels, and promoters in this article!