Preview: Seton Hall has a Valentine's date with Marquette at the Rock 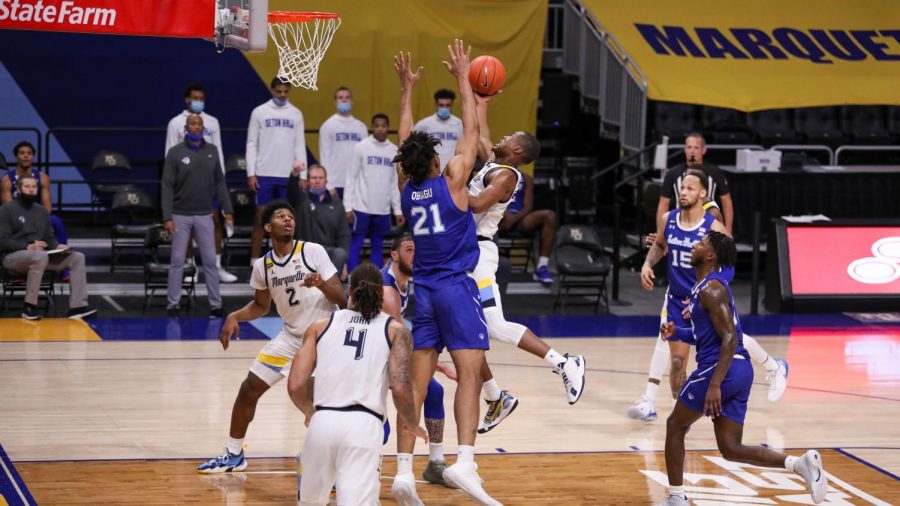 It has been almost two months since the Golden Eagles and the Pirates faced off against one another on Dec. 17, with the Pirates ultimately coming out on top. Shavar Reynolds Jr. contributed to the Pirate’s late game effort by sinking a three with 42.1 seconds left, forcing the Golden Eagles to foul the Pirates for the remainder of the game. Reynolds’ and Sandro Mamukelashvili’s free throw shooting put the Pirates over the edge and left Milwaukee with a 70-63 win.

The Pirates and the Golden Eagles both enter this game on different sides of the same coin. Marquette finds themselves coming off of a two-game losing streak, falling to 5-9 in conference play and 9-11 overall, while the Hall finds themselves looking for their third straight win.

After tough losses against two Big East powerhouses, Creighton and Villanova, the Golden Eagles are desperate for a win. The Wildcat’s 60% field goal shooting didn’t stop high scorer Dawson Garcia from knocking down 28 points, a feat Coach Wojciechowski hopes to see his players achieve in their game against the Hall. Players like Garcia and D.J. Carton, who combined for 41 of Marquette’s 64 points against Villanova, will be high on Coach Willard’s watchlist in this upcoming matchup.

The Pirates have showcased their strengths defensively during these past two games, but is it enough for a team hungry to climb the ranks of the conference? Players like Reynolds, who leads the team in steals, and Takal Molson, who played a key role in shutting the UConn offense down in their previous matchup, have a huge responsibility in locking up Marquette’s star players.

Throughout the season, the Pirates have found themselves playing catch-up when it comes down to the wire. In their Jan. 27 game against Creighton, the Pirates’ defense held up all game until a 14-2 run by the Blue Jays in the final three minutes of the game put them over the top.

In their Jan. 30 game against Villanova, down by 10 at the half, the Hall put up a strong offensive effort in the second half with the hopes of cutting their deficit, only to be answered by the Wildcats each time. With high scorers like Carton and Garcia, the Pirates cannot let these runs go unanswered. If Mamukelashvili and Myles Cale, combining for a total of 42 points in their last game, channel that same heat in this matchup, they can keep the Golden Eagles’ potential lead from slipping away.

This matchup features two teams hungry to move up in the ranks of the Big East with their sights set on the tournament, but the question still stands: who wants it more?

Liam Plate and Ryan Johnston are on the call joined by your in-studio team of Christian Gardner and Will Swankie. The Pirates have a date with the Golden Eagles at the Prudential Center this Feb. 14 at 3:00 p.m. Be sure to tune in to 89.5 FM WSOU for your pre-game and post-game coverage of the matchup.