UFC Vegas 4 Main Event could be Fight of the Year 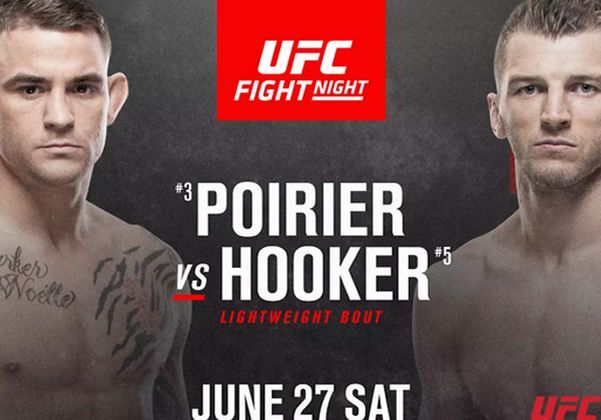 UFC Vegas 4 delivered on all fronts with action packed fights from the preliminary card to the main event. As anticipated, the main event bout between former interim lightweight champion Dustin Poirier and Dan Hooker was the most entertaining fight of the night.

Poirier (26-6) defeated Hooker (20-9) by a razor thin unanimous decision victory. The judges scored the bout 48-47,48-47, and 48-46. It was astonishing that the fight went the distance because Hooker and Poirier were covered in blood and were physically taxed by the end of the second round.

This fight was easily a “Fight of the Year” candidate based on the amount of physicality and how even the fight was up until the fifth round. The first round saw the two combatants coming out of the opening seconds swinging for the fences and defending takedowns.

The next round was arguably the best round of fighting in the past 20 years of MMA history. Poirier and Hooker were in imminent danger throughout the entire five-minute period. Hooker had blood streaming from his nose in the shape of a triangle, while Poirier sustained a nasty gash under his right eye that resulted in a stream of blood down his face. There was a cut above Hooker’s right eye that worsened as the fight progressed.

Right before the third round started, UFC commentator Michael Bisping said on the broadcast, “In recent memory, this is the best fight I’ve seen in my life.” Bisping, a former middleweight champion, would be spot on with his estimation because there has not been another fight in any combat sport that was this thrilling.

At the 2:45 mark in the third round, Hooker shot in on Poirier with a takedown, but Poirier defended and performed a guillotine that Hooker slipped out of. Poirier worked off his back for nearly two minutes and worked his way back to his feet. The two men traded blows until the end of the round, which was a testament to their mental fortitude and stamina.

Both corners did the best they could do to stop the bleeding, but the fourth round was even more violent than the previous three rounds. Poirier landed 98 strikes to Hooker’s head through the first three rounds, compared to Hooker’s 81 shots upstairs landed through 15 minutes.

Hooker caught an attempted kick from Poirier and took down Poirier and managed to maintain control for nearly one minute. Poirier worked his way off his back and even started his own attack on the ground, which included a triangle and an armbar attempt with 1:40 left in the fourth round. The round finished with Hooker and Poirier battling in the guard and Poirier landing significant strikes from the bottom position.

The fifth round would decide the winner because the fight was virtually even. Most people that watched the fight, including the judges, gave a slight edge to Poirier heading into the final five minutes of the bout. In between the fourth and fifth round, Poirier’s cornerman asked him if he was having fun and Poirier responded, “I’m having a blast.”

We promised you a Fight of the Year contender and Dustin Poirier and Dan Hooker delivered the goods...

Get off your seat and applaud these warriors pic.twitter.com/VMj56gnIr1

Both fighters were throwing shots at the start of the fifth round and Poirier was timing his jab. It wasn’t as exciting as the other rounds because Hooker and Poirier were exhausted, but they continued to engage. Hooker performed a takedown with 2:15 remaining in the fight, but Poirier was able to stand up and continue his striking.

Poirier landed a massive left hand on an approaching Hooker with 30 seconds left, and he sprawled on a takedown attempt from Hooker. Poirier closed out the fight with a neck crank on the cage and he landed scoring blows that Hooker had trouble defending.

Poirier was more active in the final minutes of the fight, which swayed the judges’ decision. He entered the bout ranked No. 3 in the lightweight division and he could climb up to the No. 2 position when the latest rankings are released.

For Hooker, he shouldn’t have a significant drop from his No. 5 ranking, but he will have to restart his journey towards the lightweight championship. On the other hand, Poirier will be in the running for another title opportunity or he will receive a massive fight with another top contender in the division.

Dustin Poirier gets the W after and incredible fight with Dan Hooker.

In the post-fight interview with UFC play-by-play announcer Jon Anik, Poirier discussed how he was doubted by Hooker and the fans.

“It was a tough fight. [Dan Hooker] is on the rise and he thought he was going to get past me. He talked a lot of trash like he was going to move forward and fight the champ,” said Poirier. “I’m the champ, man. This is what I love to do. I put all the work in, and I trusted in my team and my skill and work ethic.”

Potential fights with Tony Ferguson and Conor McGregor are in his future if he does not receive another title fight. Regardless of the future, this fight between Poirier and Hooker will go down as one of the greatest fights in UFC history.