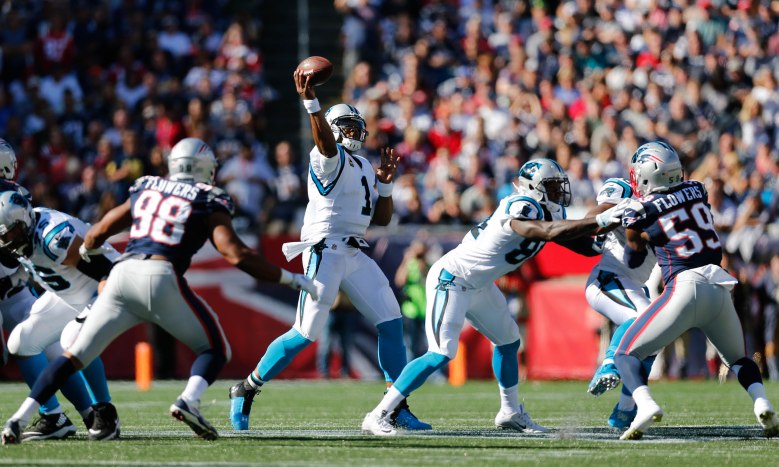 The New England Patriots reached an agreement with former NFL MVP Cam Newton on a one-year deal, according to reports from ESPN’s Adam Schefter and Chris Mortensen.

The deal with the Patriots includes several incentives for Newton. The quarterback found a new home in New England after he was released by the Carolina Panthers in March. Newton joins a quarterback depth chart that includes Jarrett Stidham and Brian Hoyer.

This news came as a surprise for many since the Patriots seemed comfortable moving forward with Stidham as their quarterback. Newton was training all offseason for an opportunity to prove that he belongs in the NFL as a starting quarterback. This signing made it seem like the New England Patriots viewed him as a starter, and he will be able to compete for the starting position in training camp.

Newton’s career was in limbo because teams around the league halted talks with him for a while. The Jacksonville Jaguars were a rumored landing spot for Newton, but they made a commitment to Gardner Minshew to be the franchise’s quarterback for the 2020 season.

The agreement marked the beginning of Newton’s 10th season in the NFL. He was drafted No. 1 overall by the Carolina Panthers in 2011 and spent the previous nine seasons of his career with the Panthers. Newton won an NFL MVP in 2015 and carried Carolina to an appearance in Super Bowl 50 that same year. The past two seasons were cut short for Newton due to injury. In 2019, Newton started the first two games of the season and he did not appear in another game for the remainder of the season.

He was placed on the injured reserve in November because a return from his foot injury was unlikely in 2019. Following his release from the Panthers, Newton took to Instagram in a video where he expressed intent to prove the Carolina Panthers wrong.

In New England, Newton will look to replace Tom Brady, who was the quarterback for the Patriots for 20 seasons and he signed a deal with the Tampa Bay Buccaneers. The Patriots won the AFC East and made the playoffs last season, and they look to be the favorite again in the AFC East with the addition of Newton.

When Brady signed with the Buccaneers, it seemed that the changing of the guard in the division would happen in 2020. The Buffalo Bills made the playoffs in two of the last three seasons, and not having Brady in the division helped their case to be the best team in the AFC East.

Newton’s signing dampened the expectations for the rest of the division because the Patriots will be a formidable opponent with Newton at the helm. The pairing of Newton and the Patriots was an ideal match for both sides because they want to win games, and they both found the best available option in a team and a quarterback.

New England Patriots head coach and general manager Bill Belichick deserves credit for the crafty move. Even if Newton is unsuccessful next year, the Patriots are only tied to the quarterback for one season and they can still determine their future at the quarterback position.

Some would assume that Stidham is not ready to be the quarterback for the Patriots but having him learn from Newton for one season could be extremely beneficial to his career. It’s not common for a quarterback to be in the same room as two NFL MVPs in the first two years of their career, Brady and Newton.

New York Jets safety Jamal Adams congratulated the Patriots on Twitter for their deal with Newton. Adams requested a trade from the Jets earlier this month.

The New England Patriots were also in the headlines for other news on Sunday night. ESPN’s Mike Reiss reported that the NFL fined the Patriots $1.1 million and stripped them of their third-round pick in 2021 for videotaping a Bengals-Browns game, last season. Patriots TV will not be permitted to film any games in the 2020 season.