The football journey of P.J. Walker

In an offseason where it seems like the quarterback position is all over the place, one local player is making the most of this opportunity. On March 23, it was announced that Phillip “P.J.” Walker Jr. will be signing with the Carolina Panthers.

This will not be Walker’s first stint in the NFL, but this seems like it will be a better opportunity for the New Jersey native to prove he belongs in the league. Walker’s story to get back in the NFL is one of resilience. 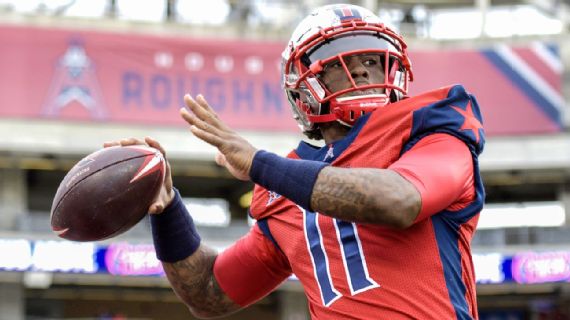 Born in Elizabeth, N.J., Walker played for the local high school team, the Elizabeth Minutemen and is known as a legend in his hometown according to NJ.com. On the football field, Walker helped orchestrate one of the best teams in Elizabeth, going undefeated and winning the state title in 2012.

That year, the dual-threat QB was named the Newark-Star Ledger State Offensive Player of the Year, completing 63.5 percent of his throws for 2,168 yards and 18 touchdowns. Walker was also was a basketball player in Elizabeth, reaching the 2012 Group 4 Final.

Walker’s performance on the football field for Elizabeth led him to be a three-star recruit, picking up offers from UConn, East Carolina, Temple, James Madison, and the University of Massachusetts. Ultimately, Walker chose to attend school at Temple University and play under first year head coach Matt Rhule.

In his freshman year at Temple, Walker had to earn the starting quarterback spot midseason. In a battle during the summer before the 2013 season, junior Connor Reilly was awarded the starting spot. Reilly started the first five games for the Owls.

After a couple of subpar performances, Walker took over at quarterback. In the first collegiate start for Walker, which was on the road against Cincinnati, Walker put up a good performance, going 12 for 22, 200 yards, two touchdowns and one interception over the air, while also netting an additional 47 yards on the ground.

Walker would continue his great performance his freshman year, leading Temple to their first win of the season on homecoming day against Army. Walker finished his freshman year setting a Temple freshman record with 20 passing touchdowns and was tied for fourth with most passing yards in school history and was a finalist for the Manning Award.

Since the middle of his freshman year, Walker was the starter for Temple, starting all the games that he appeared in. During his sophomore year, he led the Owls to their first victory over an SEC team since 1938. Walker’s junior year, he was the only offensive player to start every game in the season, setting a school record for passing yards, total offensive yards, pass attempts and completions in a season.

During his senior year, Walker broke Temple’s all-time passing-yards record and led Temple to their first AAC Championship against Navy. At the end of his career, Walker became the school’s all-time leader in pass attempts, completions, passing yards, touchdown passes, and total offensive. He was also the first Owls quarterback to lead his team to multiple bowl games.

On May 3, 2017, Walker was signed by the Indianapolis Colts as an undrafted free agent. Walker found himself bouncing in and out of that franchise for over two years before the Colts released him in September 2019. In October, with the XFL starting to form, Walker was drafted by the league. He was allocated to the Houston Roughnecks before the official 2020 XFL Draft on Oct. 15, 2019.

In the XFL, Walker showed that his stats in college can translate on a bigger stage. In the Roughnecks first game of the season, Walker had a 61% completion percentage, throwing for 272 yards and four touchdowns, giving him the Star of the Week nod. Before the 2020 XFL Season had to be cancelled due to concerns about the COVID-19 virus, Walker seemed to be a favorite for Player of the Year. In the five games that he was able to play, he threw 15 touchdowns and only four interceptions. He also led the league in passing yards.

With Walker signing with the Carolina Panthers, he will be rejoining his collegiate head coach, as Rhule will be a head coach professionally for the first time this upcoming season. This is also an achievement for the XFL as this marks the first XFL player to join an NFL team since the start of the league.

The future of Walker’s career though is still a mystery, as goes anyone’s career. Walker will have to work for his starting spot as the Panthers currently have a total of four quarterbacks on their roster after the signing of Walker. Currently on the roster for Carolina is Cam Newton, Teddy Bridgewater, and Will Grier.

Carolina made another move at the quarterback position on Monday, as they traded Kyle Allen to the Washington Redskins in exchange for a fifth-round draft pick. The Panthers have allowed Newton to explore options for a trade, so it seems like he will be out by the time the league gets into full swing, but he will have to still duel the other two quarterbacks for a spot.

It’s something that we know he can do after working for the starting spot at Temple. From a local hero to a resurgent quarterback, it is likely that you will see Walker on a television near you on a Sunday afternoon.